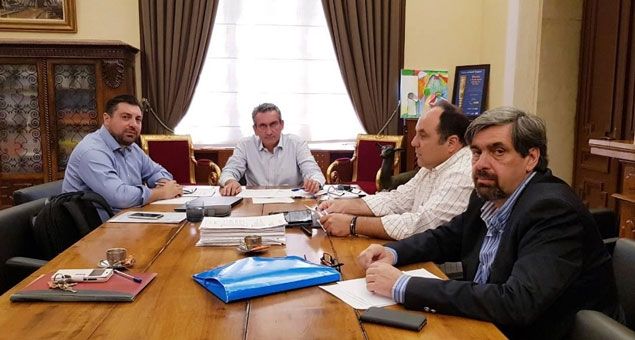 Observations and recommendations of the South Aegean Region in p / n for waterways, in view of the resolution of the House

including all provisions relating to the establishment and operation of waterways, meeting held today, Third, the office of the Regional, George Hadjimarcou.

The meeting was attended by freelance Region, regarding waterways, John Brush, the Technical Director of ESA the South Aegean Region, Nikos Oikonomou and the Executive Secretary of the Region, Michael sack.

The p / n for waterways, whose first consultation was completed on 16 September 2016 and the imminent adoption by the House,  sent just a few days ago in Region.

Today's meeting was intended to submit observations and proposals of the Region thereon, regarding the functionality and sustainability of waterways, and whether the p / n responds to the particularities and challenges of the islands.

Proposals arising through the experience of three years of work, on all the islands of the South Aegean, as initiated by the design part of the Region 27 waterways respectively in Cyclades and Dodecanese islands.

Within the next few days the factual observations and recommendations of the South Aegean Region will be sent to ministries jointly Shipping & Island Policy and Infrastructure & transport, to request their inclusion in the p / n, while promoting the direct international tender, backed by resources of the Region, for the award of files permits for the establishment and operation of waterways.