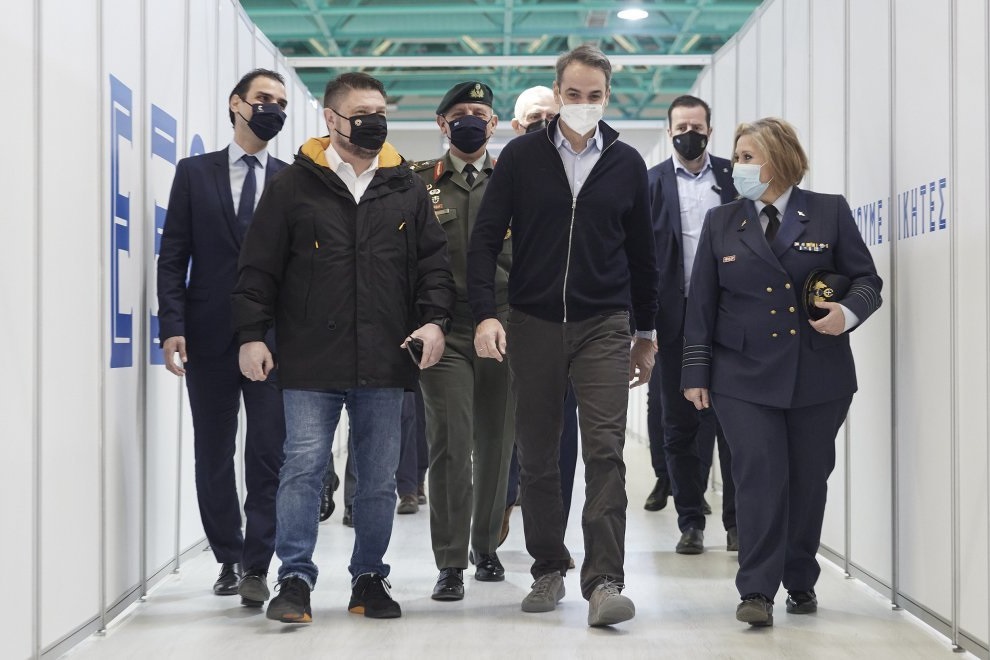 PM Mitsotakis: Vaccine all over 60 until mid-May, announced the Prime Minister from the mega vaccine

Mykonos TickerLeading news source for Mykonos and the Region
Mykonos Tciker Breaking News
To date there have been more than 1,5 million. vaccinations

Inspection at Mega vaccination center of Peristeri held on Saturday morning o Kyriakos Mitsotakis accompanied by Nikos Hardalias. From there, the prime minister said that until, the latest, early May will have vaccinated with one installment all citizens over 60 years…..

"THE “Freedom company” proceeds normally. We will approach them 1.700.000 vaccine doses in April and we expect even more deliveries vaccines», The Prime Minister stressed in this regard and added that:

"Until the end of April or the beginning of May, I hope they have been vaccinated with at least one dose vaccine all citizens of the country who are over 60 years, as well as those suffering from serious diseases».

In Peristeri is one of the two new mega vaccination centers (SS.: the other is in Greek) which are part of the operational planning of Operation "Freedom" for the vaccination of the population and which start their operation on April 1, with 48 vaccination lines in the first stage, while their total dynamics will reach 96 lines each.

earlier today, Health Minister, Vassilis Kikilias stressed that only in April they are expected to be over 1,5 million. vaccinations in our country.

Previous article Aegean Islands: The flood protection of Paros is strengthened, with works 600.000 € for the three years 2021 – 2023
Next article Daylight Saving Time 2021: At dawn today, the hands of the clocks are one hour ahead, the change of time to summer!!
Share
Facebook
Twitter
Pinterest
WhatsApp
Linkedin
ReddIt
Viber
VK
Tumblr
Telegram
Mix
Digg
LINE
Email
Print