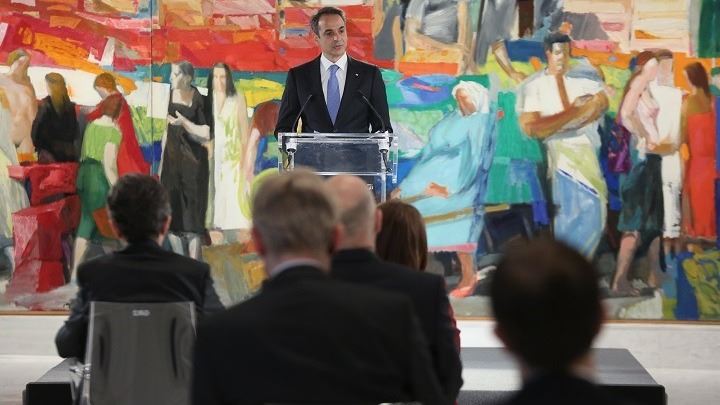 "With great pride and emotion I welcome you to Athens. On the 200th anniversary of the independence of Greece but also at the inauguration of a jewel of the capital and the whole country, of the new National Gallery », stressed the Prime Minister beginning his position.

He spoke of "an emblematic cultural landmark that meets a unique historical landmark" and referred to historical data for the National Gallery.

The Prime Minister also said that today's event sends a renewed message of dynamism at the dawn of the third century of Greek freedom.. He said that the National Gallery was a living organism that kept pace with the progress of the nation and its very history kept pace with the history of the country., starting from Aegina 1829 and Governor Ioannis Kapodistrias to collect the first works that formed the first nucleus for a future museum. As an important milestone in its history he mentioned the 1896 when the scholar and lawyer Alexandros Soutsos bequeathed to the public his personal property and his personal collection for the creation of the National Gallery. "It simply came to our notice then 1900 The new Foundation rises with the painter George Iakovidis as its first director ".

Kyriakos Mitsotakis stressed at this point that it is really a great honor for him that "twelve years after the start of the works for the New Gallery to open its doors for the first time one day before the anniversary of 200 years from National Polygenesis ". He pointed out that a suffocating timetable had been set thanks to the patience of the Ministry of Culture., the mobilization of the diligence of all the executives of the Ministry, of external collaborators and thanks to the Greek philotimos.

"For almost two centuries since its first acquisitions, the National Gallery has been a treasury 20.000 projects », said the prime minister, stressing that her permanent collection is on display for the first time with such brilliance. "It reflects the path through which the painting of modern Greece was influenced by all currents of modernism but without losing the special features of its tradition. Thus, Kontoglou coexists harmoniously with Moralis and Lytras with Hadjikyriakos-Gikas. This wealth of Greece, this wealth of the world will henceforth spread to 21.000 sq.m. with exhibition and storage areas of valuable collections, with amphitheater, with library, with state-of-the-art maintenance laboratories ". Mr.. Mitsotakis stressed that part of the cost was covered by significant private offers with the largest being that of the Stavros Niarchos Foundation.

"The new Gallery confirms its role as an ark of Greek art with international radiation, highlighting at the same time its share in European culture. But the anniversary of the beginning of the struggle for freedom and independence turns our attention especially to 35 projects loaded with history ", underlined the Prime Minister, referring to works by Greek artists between 1858 and 1898 but also in the Episode of the Greek Struggle by Eugene Delacroix, his last contribution to the philhellenic movement and another testimony in favor of the revolution next to the burning of the Turkish flagship of Ivan Aivazovsky.

He underlined that the Greece of the Greek revolution was then next to the British, French and Russian friends, peoples who eventually led their governments to the Battle of Navarino and the treaties of London, those who eventually secured national independence. "And those ties together with our fraternal relationship with Cyprus were not naturally resolved over time", said the Prime Minister characteristically.

In closing, Mr.. Mitsotakis made a historical review with reference to the ties with the countries represented at this event and their cooperation as he said: "Together we defeated the monster of Nazism by paying a heavy blood tax during World War II. Our history wants steadfast comrades in the great battles of humanity and today it finds us side by side in front of the ‘People's Market’ of Tetsis, this emblematic work that adorns the entrance of the new Gallery. It is a work dedicated to the daily communication of ordinary people because ordinary people built modern Greece, with effort, tears, sweat and often blood but always with hope ".

The Prime Minister concluded his speech with an appeal to the high friends of Greece: "So let us, in turn, respond to history by remaining partners in both peace and the new challenges that the future brings for all of us.".

Earlier, Prime Minister Kyriakos Mitsotokis and his wife Mareva Grabovski- Mitsotakis welcomed the official guests in the new complex of the National Gallery, on the occasion of completion 200 years since its Revolution 1821.

Pfizer-BioNTech Covid-19 Vaccine: 100 millions of additional doses of BioNTech-Pfizer vaccine in the EU for 2021