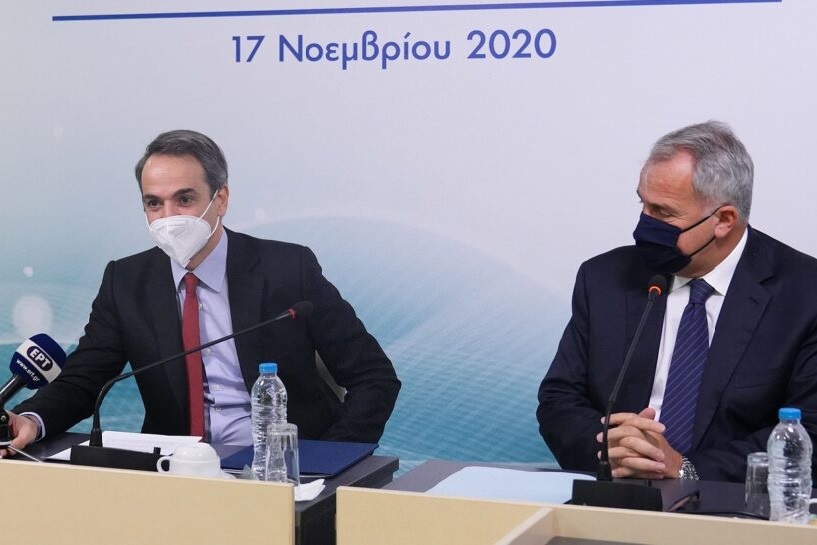 PM Mitsotakis: A New Electoral Law for the Local Government is coming – Proposal for election of mayor with 42%

Permanent Teleworking in the State
Visit of Kyriakos Mitsotakis to the Ministry of Foreign Affairs: “First the citizen, the slogan that permeates all government policies”. In the important reforms, which will be launched in the near future by the Ministry of Interior, like the abolition of simple analog in Local Government,…..multilevel governance, but also how teleworking can be integrated in an organized way into the daily life of the Public sector, Prime Minister Kyriakos Mitsotakis was mentioned in a major way, which in the morning visited the said Ministry.

Mitsotakis - Voridis: A New Electoral Law for the Local Government is coming

The New Electoral Law for Local Government but the appraisal and the targeting in the State, occupied today's meeting of the Prime Minister with the new political leadership of the Ministry of Interior.

Mr.. Mitsotakis, after the reorganization, chose to start his visits to the ministries from what made the biggest changes. And, according to information, the Ministry of Labor will follow, most likely on Friday.

As said Mr.. Mitsotakis after his meeting with Mr. Voridis and Mr. Petsa:

-The next law on Local Government will be approved at the next Council of Ministers, which will eliminate the simple analog. indeed, the prime minister described the law as mature.

"Let me also emphasize the special importance I attach to the change of the electoral system of the Local Government, something that was our pre-election commitment. We have already made some first interventions to facilitate the operation of Municipalities and Regions. It is our commitment, Nevertheless, to change the system of simple analog to better align the will of the citizens with the majorities in the Municipal Councils. We will bring the relevant Bill which is ripe for approval at the next Council of Ministers in January and I think we can legislate very soon after, always in consultation with the institutional representatives of the Local Government ", he said.

*The proposal will be, those mayors take over 42% to have a majority corresponding to the one given by "Kallikratis". namely, 3/5 -2/5.

Those who receive less than 42% and lead to a second round with 50% +1, are likely to have a smaller majority, by one or more seats.

The Deputy Minister spoke about significant development, financial instruments which we have at our disposal for to support the initiatives of the Local Government. We referred to the rural road construction projects, which are works which are easily feasible, very important, Nevertheless, because they help to support the primary sector as a whole ".

Then Mr.. Mitsotakis stressed that in the second year the emblematic will be promoted, as he characterized it, reform of multi-level governance.

"The very big chapter of multi-level governance remains open, of boundaries and responsibilities between the central state, of Decentralized Administrations, of Regions and Municipalities. Which in itself will be an emblematic reform, which, Nevertheless, he still has important work to do in order to mature.

Special emphasis was given by Mr.. Mitsotakis on the subject of evaluation and teleworking, that we plan “to integrate it in a more organized way in everyday life, the working day of the State, when we have left the pandemic behind ".

"There are important issues that have to do with the staff, with worthy civil servants, who, even in very difficult conditions, as a rule, overcame themselves in order for the state to continue to function smoothly. The teleworking that we were forced to impose on the State for reasons of public health gives us the opportunity to think that we can integrate it in a more organized way in everyday life., the working day of the State, when we have left the pandemic behind.

And of course there are still important issues regarding the evaluation of civil servants, always in the sense of rewarding and especially recognizing the offer of those exceptional civil servants, who very often feel that in a compensatory rating system their offer is not recognized. There are issues that have to do with the new law that we voted for the operation of ASEP, so that all secondary legislation can be launched to be implemented as soon as possible. And, sure, the very large capital of multilevel governance remains open, as the Minister said, the boundaries and responsibilities between the central state, of decentralized administrations, of Regions and Municipalities. "Something that will be an emblematic reform in itself, but which still has important work to do to mature.", stressed Prime Minister.

Βορίδης: To discuss targeting and evaluation in the State

In his statements after the meeting, the Minister of Interior Makis Voridis gave special emphasis to the State, which "will provide their services in a friendlier and more transparent way to the citizens". Opening at the same time the issue of evaluation and targeting of employees: "We need to discuss issues of targeting and evaluation. The citizen must see them work. They are not distant concepts ", added.

According to Mr.. Βορίδη, "A large part of the important reforms that need to be made in the state start with the Ministry of Interior. The strategic direction is clear and unambiguous, at the end of the Administrative Reform what θέλουμε είναι ένα Δημόσιο που να μπορεί να παρέχει φιλικότερα και διαφανέστερα, in a cleaner way, services to citizens and in this there is a whole framework of discussions that we need to have. There is an ambitious reform agenda, we will take the steps quickly and decisively and this is obviously in accordance with the fulfillment of the mandate we have received from the Greek people ", concluded.

Previous article Extension of the Coastal Zone – FM Dendias: Expansion to the south and east of Crete. Territorial waters are a matter of sovereignty, is not negotiable
Next article Reopening of schools: February 1 is the most probable date for the opening of the Schools
Share
Facebook
Twitter
Pinterest
WhatsApp
Linkedin
ReddIt
Viber
VK
Tumblr
Telegram
Mix
Digg
LINE
Email
Print