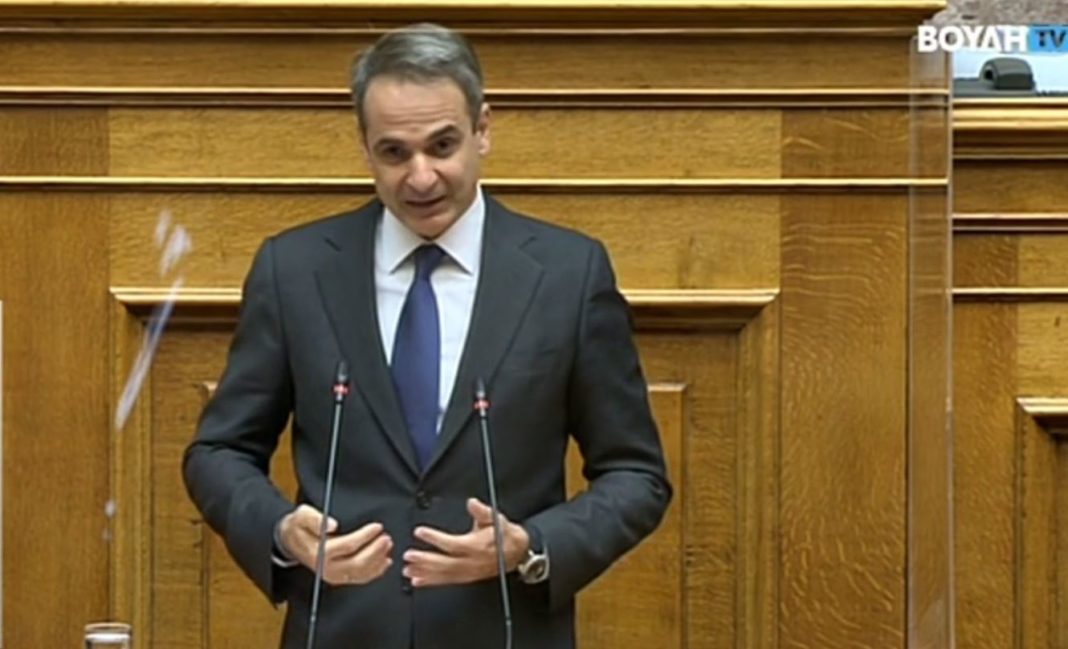 PM Mitsotakis: Greece can obviously exercise its right in Crete at a time and under conditions that it will choose

With a reference to the united state of the Ionian Islands, which acquired constitutional status in 1818, Prime Minister Kyriakos Mitsotakis began his speech in Parliament, in the discussion of the bill "Determination of the width of the coastal zone in the sea area of ​​the Ionian and Ionian Islands up to Cape Tainaro of the Peloponnese"………

"It was the first form of territorial reference to Hellenism after 400 years of slavery. And space that 1864 was incorporated into the Greek kingdom. "More than a century and a half later, Greece is growing again in the same place," said the prime minister and continued: "It simply came to our notice then 2021 we take the second big essential step. Our country is expanding to 12 miles of its dominion in the Ionian. I had already announced it in August. And indeed our seas there are doubling. Greece can obviously exercise this right in Crete as well. But in time in a way and under conditions that she will choose ".

Constitutes, a very clear message that the government is sending to those who are trying to deprive us of this right from our homeland with threats and leontarianism, the Prime Minister then stressed. "Today's development was not accidental and nothing was self-evident" he continued. "It happened because of active diplomacy and left behind ankylosis and phobic syndromes. With fewer words and more action. We have reached successive agreements with Italy and Egypt. The agreements are the result of hard and difficult negotiations under the Foreign Minister, Nikos Dendia » Kyriakos Mitsotakis mentioned and explained: "These are two links of peace and cooperation but also a model of security and stability in an area that some are threatening to turn into a minefield.. Only recently did the Albanian prime minister announce that the extension to 12 miles is an inalienable right of Greece proving that the Mediterranean can become a sea of ​​peace ".

As the Prime Minister explained, "The expansion of territorial waters was a constant argument of every government. Today, for the first time, the expression of intention is transformed into a tangible result and current reality. The Greek attitude towards the challenges was different ".

Kyriakos Mitsotakis also referred to the new US President, saying that he is an experienced politician who knows the situation in the Eastern Mediterranean. "Greece has become a key ally of the United States. I know President Biden personally. An experienced politician who knows our region and its sensitivities. It walks with stable and non-negotiable values. I am sure that the Greek-American ties will become stronger than ever ".

The exercise of sovereignty sends a message to the East. Violence does not produce justice, but the law peace

"Action on the international fronts would not be possible without the guarantee that the shield of our country is secured," the prime minister continued.. "You know the purchase agreement 18 Rafale fighters has been voted on and launched at unprecedented rates. At the same time the upgrade of the F-16s and the acquisition 4 New multi-role frigates. Decision that we will make in the first half 2021. A program 105 total cost initiatives 11 billion. Euro".

It is about, as Kyriakos Mitsotakis said about "Unified foreign policy for which the Prime Minister and the Minister of Foreign Affairs cooperate" while answering, indirectly but clearly in the official opposition, he said: "I heard about some differences. These are allegations without a trace of truth, strange to be heard by those who had given the responsibility on the one hand to Kammenos and on the other to Kotzias ".

"The scope of this bill exceeds national limits" The Prime Minister then stressed and sent a message to Turkey: "It creates stability and security. The exercise of sovereignty sends a message to the East. Violence does not produce justice, but the law peace. With the same legal grid we can regulate our various Turkey as long as its leadership abandons the monologue of disputes and comes to the table of discussions. ".