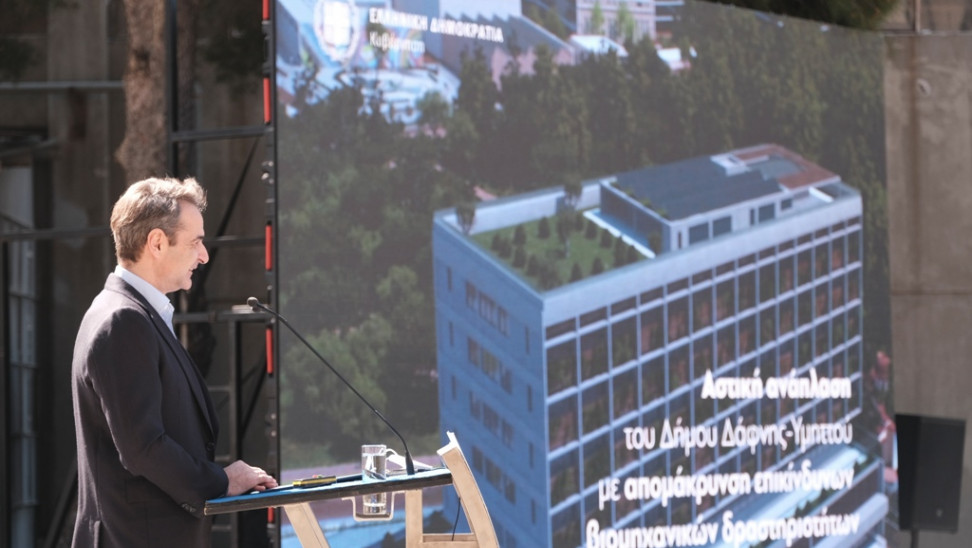 The remodeling of the old factory of PYRKAL in the area of ​​Ymittos with its transformation into a park with the proposed name "Andreas Lentakis", which will be a "lung" of green for the wider region and will host the services of nine ministries and other organizations, announced today the Prime Minister Kyriakos Mitsotakis, during his visit to the historic industrial unit…………

Intervention according to government plan will free public spaces for citizens, creating a park 80 acres, something that has been a request of the residents for decades. At the same time it will save more than 1 billion. euros in the long run, based on the rents currently paid by the government to 7 until 8 years.

"The plan drawn up by the government envisages the creation of a new green lung in the city center", said the prime minister from the facilities of the old PYRKAL, which today belong to the Hellenic Defense Systems. The project is expected to be delivered in about five years and the relocation of public services is scheduled to take place in the period 2025 – 2026. The investment will be made through PPPs and it is estimated that it will rise to 250 EUR million.

According to the plan, the development of the property allows the substantial upgrade of the operation of many public services, which today are scattered in dozens of rental buildings, burdening public funds. Consistent, not, fully in line with the needs of the local community, as the removal of the plant from the urban fabric has been requested by its master plan 1996.

"We are given the opportunity to perform 120 acres, 80 acres in a park, 40 acres in common areas to the citizens of Daphne and Hymettus ", stressed Kyriakos Mitsotakis.

"We are located three kilometers from the center of Athens, very close to Metro station. The ability of this space to host 9 Ministries will also lead to the legal upgrading of the region. Simultaneously, many properties in the city center will be released, which can be used for other purposes ", the Prime Minister pointed out.

Alongside, the properties that will be evacuated by the State can be used for residential, commercial and cultural uses, contributing to the revitalization of the center of Athens.

Citizens and the state won

Today the State rents in total 141 buildings for housing ministries. The annual operating costs and rents of the ministries and services that will be moved to the new park exceed 33 EUR million, while in many cases the rented facilities do not meet the current environmental criteria.

Given the savings of resources from the transfer of government services, the direct and indirect revenues from the projects and the exploitation of the State real estate that will be released, the development of the park is estimated to lead to savings 1 billion for in-depth public funds 25 until 30 years.

I suggest it be named "Andreas Lentakis"

"The name of this place, as “government park”, I was thinking as I listened to your speeches, that perhaps his character is really unjust. Because, Yes, it is an opportunity to gather a number of government agencies in this area, above all though, it will be a park, a recreation area for the citizens of the Municipality of Dafni-Ymittos ", noted Prime Minister.

as stated, "This decision will be a decision that I would like you to make in your municipal council. I thought the most appropriate name for this place would be a government park “Andreas Lentakis”. To honor the memory of an emblematic physiognomy, which had its roots here in the Municipality, was the mayor of Ymittos and changed the face of the city and to do in this way the connection between a project that has national characteristics, but at the same time features locally. The decision, Nevertheless, after all, naming will be a decision you will make, as this space is a space that primarily concerns you ".

The relocation is projected to lead to a reduction in energy consumption and emissions by 60 until 70%, as the new facilities will be bioclimatic. The "green" footprint of the investment will be complemented by renovation projects that will accompany it for the development of infrastructure that will improve the quality of life of residents.

The remodeled complex is located a very short distance from the "Dafni" Metro station, which means that there will be no traffic congestion, while the plans for the new Line 4 provide for the construction of another station in the area.

The mayor of the city, Tassos Biniskos, stressed that this is "a project that will upgrade the daily life of our citizens" as sports and leisure facilities will be created in place of the abandoned facilities., while the other speakers, referred both to the benefits of the huge band's performance to the citizens, as well as economies of scale in the functioning of the state and the reduction of energy consumption and emissions that will be 9 ministries.

Concluding his speech, the Prime Minister and referring to the discussion he had with the mayor and. Binisco said "closing, Mr Mayor, let me make a reference to a conversation you told me when I entered that space, already, the children of your Municipality, they ask you when they will be able to ride a bike in this area. The answer is soon ".

Finally, he referred to the urban redevelopment that the government has launched, the work of Elliniko, the work in Tatoi, the relocation of Korydallos prison, the old industrial area of ​​"CHROPEI", which will be turned into a technology park, the performance in the Municipality of Agioi Anargyroi of the old train parking lot and added “it is coming, Well, to add to this cycle of major urban regeneration and our current intervention with the creation of this new, mixed space in which they will be housed 9 ministries and many important government departments, but at the same time it will create an important recreation and green space for the citizens of the Municipality of Dafni and Ymittos, but also for all the inhabitants of the wider area of ​​eastern Athens ".