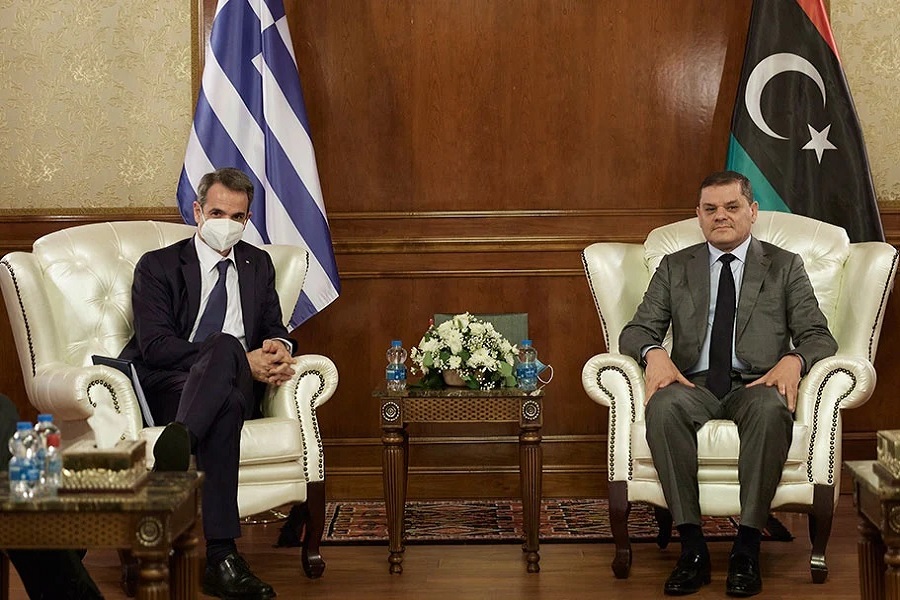 PM Mitsotakis: Foundation of the new starting point in Greek relations- Libya, the belief in the principles of international legality

"I am very happy that my presence in Libya is combined with a double restart: the new beginning of the same country and our bilateral relations " stressed the Greek Prime Minister, Kyriakos Mitsotakis, launching joint statements with Libya's caretaker Prime Minister, Abdul Hamid Dibeba, Tripoli…..

Kyriakos Mitsotakis thanked Abdul Hamid Dibeba for the "fruitful discussion" and underlined: "My main purpose is to highlight the reopening of the embassy as a milestone in the dynamic resumption of Greek-Libyan relations and to convey a message of support for Libya's efforts for peace and progress within the EU and the UN.".

also, The Prime Minister pointed out that Greece will stand by you on the road to free elections away from foreign troops and with a compass prosperity in the Mediterranean and sent the message: "Time to leave behind what our relationships have experienced in the past. Our cooperation can be promoted at a fast pace ". He noted that business interest in energy is reviving, tourism, Health and constructions.

Further, Mr.. Mitsotakis made it clear that the foundation of the new starting point in our relations is honesty, the spirit of dialogue and the belief in the principles of international law, and that means erasing the mistakes of the previous period.

In this context, The Prime Minister said that "the precondition for any progress is the immediate and complete withdrawal of foreign troops from your territory and for us it is very important to cancel illegal documents that some present as international agreements., but for us they have no legal force ".

"I welcome your willingness to discuss the delimitation of our maritime zones" stressed Kyriakos Mitsotakis, during joint statements with the caretaker Prime Minister of Libya.

Alongside, The Prime Minister pointed out that the friends of Libya are close to it and in the end the geography determines the relations between the two countries and not the lines., that some people draw on maps ".

A. X. Dbeiba: There is a long history of economic and trade and even humanitarian relations between the two countries, said the Libyan prime minister

The Prime Minister of the Transitional Government of National Unity of Libya, Abdel Hamid Dibeba, taking the stage for his joint statements with the Greek Prime Minister thanked him for this visit.

However, he also referred to the role played by Konstantinos Mitsotakis in improving relations between Greece and Libya.. "We are happy to improve relations between the two countries", said the Libyan prime minister.

Referring to Libya 's relations with Turkey, Mr.. Dibeba stressed that "we seek to improve relations and still encourage negotiations between Greece-Turkey and Libya-Turkey on the definition of economic zones to continue cooperation in the Mediterranean region.".

Closing its placement, Mr.. Dbeiba pointed out that his country seeks good relations between all countries in the region and stressed that through every agreement it pursues its interest.. "We take care of the interests of our country, of our people ", as every country does said concluding.