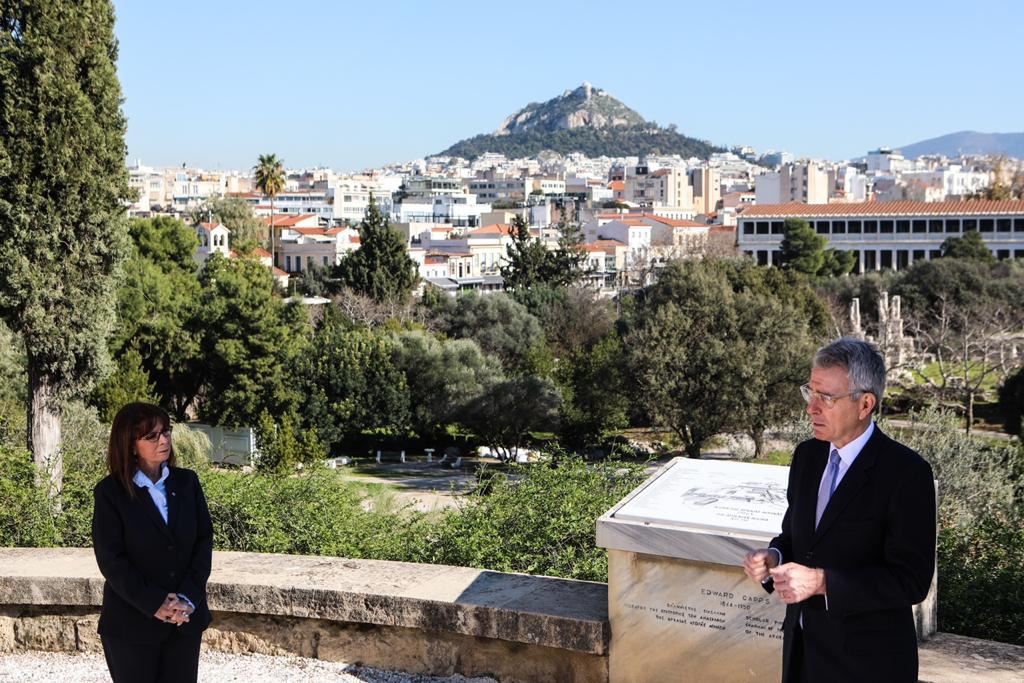 President Sakellaropoulou: I am confident that friendship and cooperation with the United States will become even stronger

The certainty, that the relations of friendship and cooperation between Greece and the USA, will become even stronger during the term of the new American president, Joe Biden, expressed the President of the Republic, K. Katerina Sakellaropoulou, in her speech at the event organized by the US Embassy in Athens on the occasion of the swearing in of US President Joe Biden and Vice President Kamala Harris, at the invitation of the American ambassador to Athens, Jeffrey Paiat. The event of the American embassy took place in the Ancient Agora and was part of the campaign "USA & Hellas: Celebrating 200 years of friendship "…………

"The long friendship between our peoples dates back to the close relationship between the American and Greek revolutions," the President of the Republic said elsewhere in her speech., adding that “The anniversary of 200 years from 1821 is an occasion to honor our ties ".

Specifically, the President of the Republic, she said in her speech:

"Today is an important day, not just for the United States of America, but for the whole world. And I am very glad that we are in the ancient market of Athens, the place with the highest symbolic value for democracy. I would like to extend my warmest congratulations to President Biden and Vice President Harris and I am confident that the friendship and cooperation between the two countries will become even stronger..

I hope that the term of President Biden will make a decisive contribution to the healing of the wounds inflicted on January 6 in the American institutions.. Democracy in America has solid foundations dating back to the glorious birthday of the American nation. His fathers, the Founding Fathers and the authors of the Federalist Papers, were inspired by the Athenian democracy and the philosophy of the ancients, Aristotelian wisdom and virtue as a citizen. It was with these values ​​that they solidified modern American society, assembling passion with interest, to make it possible for everyone, according to the Declaration of Independence, the pursuit of happiness.

The long friendship between our peoples goes back to the close relationship between the American and the Greek revolution. The anniversary of 200 years from 1821 is an occasion to honor our bonds. Remember the admiration of the American Philhellenes for our unequal struggle, in which some of them, brave and selfless, actively participated. To re-read the moving correspondence of Thomas Jefferson with Adamantios Korais. "No people feels more vigorous sympathy than Us for the sufferings of Your compatriots.. "No one addresses God with warmer and more sincere supplications for the success of their goals," Korais said enthusiastically., at 31 October 1823, Jefferson, in the letter with his proposals for the Constitution of the new State. This warmth of the Americans is reciprocated and recognized by the Greeks, with the greatest possible symbolism. In the 22nd turn of the Hymn to Eleftherian, part of which is our national anthem, Solomos will write "Gardiaka rejoiced and Washington's land and irons remembered that she was also tied".

Two centuries later, the democratic and liberal legacy of the American and Greek revolutionaries remains alive and well. In the battles of their independence, the ideal of self-determination and political freedom was forged., the modern definition of democracy, as later formulated by Abraham Lincoln in Gettysburg as "the government of the people, by the people and for the people ". The guarantee emerges from the womb of the 19th century, against any oppression, institutional counterweights, of checks and balances, and the judicial review of the constitutionality of the laws established in the decision Marbury vs Madison of the Supreme Court and has been followed since its inception by the Greek legal order. These great principles, in law and politics, still ensure our democracy, to the difficulties and tensions of our time.

The test that the coronavirus has in store for our planet is not only about public health. It is also a path of endurance for democracy itself, our stability and our fundamental values. In this painful, full of loss and mourning, route, humanity awakened, science has grown, society came together for a common purpose. The people next to us, the health staff and those on the front line for all of us, they shone and inspired us, setting daily the example of her ethics of care and solidarity. The democracy, as the ancients taught us, is not limited to the rational rules and the assumption of the debt due to us when we participate in the commons. It becomes even stronger and more prosperous, when it rests on a fragmented community of emotion and morality.

Many speak pessimistically about the crisis of democracy and in its name often try to instrumentalize the masses and arbitrarily appropriate the popular will. They underestimate, Nevertheless, the authentic power and perception of the people, as well as the firm guarantees of the institutions and the rule of law. They ignore the inherent and unique possibility of democracy to be renewed and protected from its enemies, without losing her soul.

This belief in the value and ideals of democracy is shared by our peoples and is honored today by the "USA & Hellas: Celebrating 200 years of friendship ". I would like to warmly congratulate the US Embassy on its initiative to organize a variety of actions, cultural and educational, which highlight all that connects us and strengthens our cooperation.

The anniversary of his revolution 1821 is an opportunity to reflect on our collective selves and to deepen our democracy. To reflect on our successes and mistakes. To draw strength from the self-sacrifice and example of our ancestors. Unity and sympathy, our commitment to the common good, is the loudest message of our celebrations ".

Today is a celebration of democracy. I was honored to mark it with @PresidencyGR at the birthplace of it all. Hear our remarks on the occasion of the U.S. presidential inauguration tonight on @ERTsocial. pic.twitter.com/JBijwbiWm1

Previous article Biden and Harris Inauguration: Live – Biden swearing in minute by minute
Next article President Biden: Joe Biden has been sworn in as the 46th President of the United States – To stop the civil war, I will be President for all Americans
Share
Facebook
Twitter
Pinterest
WhatsApp
Linkedin
ReddIt
Viber
VK
Tumblr
Telegram
Mix
Digg
LINE
Email
Print

UEFA Europa League round of 16 draw: With Arsenal, Olympiacos in the "16"