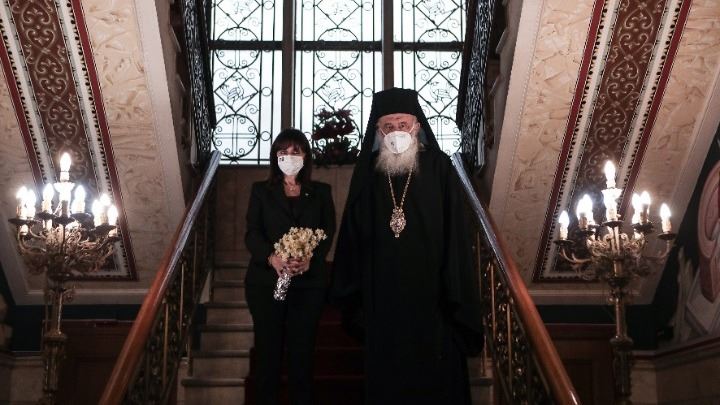 President Sakellaropoulou: Fertile exchange of views at the meeting with Jerome

For "a fruitful exchange of views, in a climate of mutual understanding ", The President of the Republic Katerina Sakellaropoulou spoke after her meeting, earlier today, with the Archbishop of Athens and All Greece Mr.. Jerome in the Archdiocese……

"The practical solidarity of His Beatitude to our afflicted fellow citizens and his sensitivity to the problems of the homeland confirm the role of the Church as a vehicle of meaning and trust," she said.. Sakellaropoulou. Alongside, noted that, during their meeting, talked about the issues that currently concern our country, saying that the focus was on the pandemic and its effects on the lives of all of us.

"There are many difficulties, but our common and optimistic finding is that the threat has brought us closer. We talked about the vaccine and the great hope it gives us and stressed the essential contribution of the Church in encouraging our fellow citizens to be vaccinated, so that we can all return healthy to our social life ", the President underlined.

reported, also, that they discussed the essential role that the Church has always played in the critical moments for our nation and focused on its decisive contribution to the struggle for independence. "Contribution that will emerge in the events of the anniversary for the two hundred years since the Revolution of 1821" added the President of the Republic.

From his side, Mr.. Jerome thanked the President "for her kind thought to visit the Archdiocese, thus proving its respect and honor to the Orthodox Church. Church, which offered many and varied spiritual and material goods to the Greek Nation and the Greek State during the times of slavery, during the times of the liberation struggles, but also subsequently by 1821 until today, 2021, year in which we solemnly celebrate 200 years since our release ".

Pointed out, yet, that “this visit, symbolic and substantive, due to the time at which it takes place, depicts and underlines the good relations that have always existed between the Church and the State and especially from the founding of the New Greek State until today ".

He wished, end, "These good relations to continue with the presence and interest of the most outstanding new President, Aikaterini Sakellaropoulou in the interest of our country, of Orthodoxy and the people, who respects and honors the sanctuaries and saints of our race and pious Nation ".