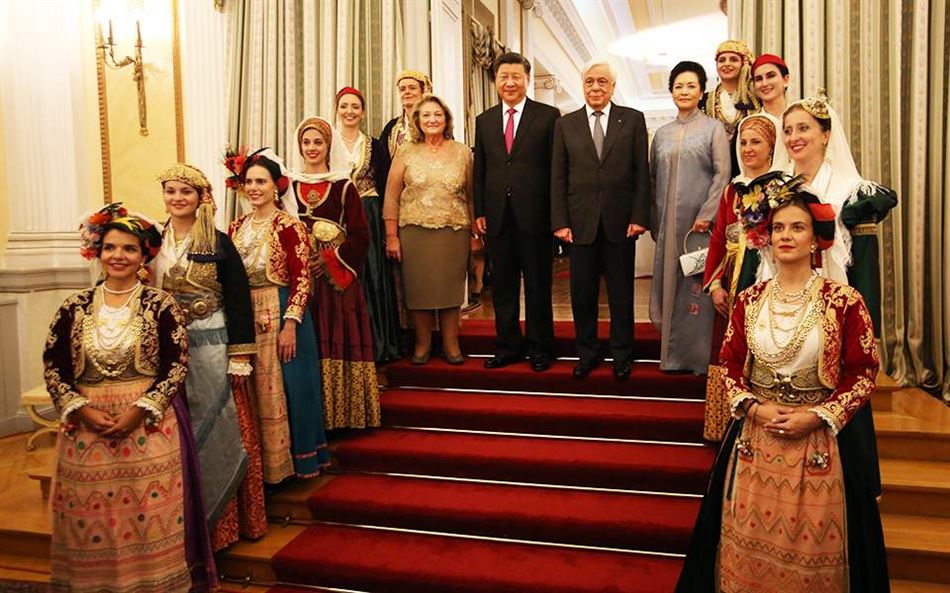 For a new course collusion and co-creation between Greece and China, which opens with the visit of Chinese President, Shi Tzinpingk, in Athens, He spoke of the President of the Republic, Prokopis Pavlopoulos, during his address at the official dinner hosted in honor of the Chinese counterpart, the presence of the Prime Minister, Kyriakos Mitsotakis, the Presidential Palace………

Mr.. Pavlopoulos reiterated that substantially upgraded the strategic relationship between the two countries, as it was launched in 2006, starting from the lining of the Cosco, and referred to a new course collusion and co-creation, to reclaim the historical perspective their part.

Referring to his visit to Beijing last May, thanked for the unique welcome and hospitality, stressed that he experienced closely the strides China, under the strong and inspiring leadership of Shi Tzinpingk and expressed his admiration for the achievements of the Chinese people. "Advancements leading to a rapid rise in living standards of its citizens and which demonstrate the China factor in global economic growth driver and also worldwide. The new initiative of China, under your guidance, which opens the New Silk Road, confirming argument's safe ", added Mr.. Pavlopoulos.

pointed, also, that the Greeks are ready to get along with China and in’ this new path of development and creation. Specifically, reported: «Τούτο προκύπτει αβιάστως από το ότι ήδη συμμετέχουμε ενεργώς στις πρωτοβουλίες “Belt and Road” and “17+1”, which concerns the region of Central and Eastern Europe and is, most, complementary action of BRI initiative. How, not, him, Greece feels the satisfaction because the vision of peaceful and creative coexistence between East and West begins to be doing ".

supported, yet, that in this regard contributes greatly "Our commitment, during our meeting in Beijing, that all our cooperation is based on the strict observance of international and European law, Overall". indeed, He recalled the statement of the Chinese President in favor of a strong European Union, in favor of an integrated European project, able to play its historic role for global consolidation, internationally, particularly the principles of humanity, of peace, of Justice, mainly, not, social justice.

Alongside, He said that we favor the initiation and promotion of the integration process in the European Union countries of South East Europe, which are not yet members. However, He stated that it "requires full compliance throughout the European acquis, without any exclusion or deduction ".

End, as to the Cyprus, He reminded that we are in favor of direct just and viable solution of, in full respect of international and European law, without occupation forces and outdated third-party guarantees.

concluding, Mr.. Pavlopoulos noted that relations between Greece and China fortify our close cultural relations, which are fundamental buttresses our ancient cultures. They are those cultures that coexist harmoniously, because they have to focus on people and the peaceful coexistence of people and stressed that "the true civilizations do not clash, but by birth they are destined to serve man and peace, building communication bridges and demolishing the walls of separation ".

With rapid reflexes, from March until today, in the particularly difficult conditions created by the pandemic, managed to procure and deliver to the whole ...
Read more

Taxation and taxes: What applies to the Fines and Interest for those who submit overdue declarations!!

Deadline until 28 August to file their tax returns have about 1 million taxpayers, provided the installment of July and .. is paid..
Read more

Appeal to our young people for attention!! To take responsibility for both their individual health and the safety of society, and "yes ...
Read more
Previous article C. Hadjimarkos: "The islands starring in major sporting events, who love sport and extroversion, is ERGO Marathon Expo exhibition. Our Region is everywhere "
Next article Keep Your Laptop open while you close the display cover!! What action should you!!
Share
Facebook
Twitter
Pinterest
WhatsApp
Linkedin
ReddIt
Viber
VK
Tumblr
Telegram
Mix
Digg
LINE
Email
Print

With rapid reflexes, from March until today, in the particularly difficult conditions created by the pandemic, managed to procure and deliver to the whole ...
Read more
View more