In the country weather grip!! Showers, hailstorms, laspovroches!! When you hit in Mykonos!!

detailed forecast. Deteriorating weather today. When the Mykonos will be affected.

New wave of fierce storms will hit the country today. THE weather according to EMY it brings us heavy rains and storms, hail, but also winds that in the Ionian will reach up to 10 bf……

Rain and thunderstorms are forecast tomorrow, Wednesday, in the region of Attica due to bad weather "Victoria".

Wednesday afternoon, the effects on the basin are expected to be strong in places and there will be significant rainfall., according to the meteo meteorological service of the National Observatory of Athens.

The barometric low that brings the bad weather "Victoria" is approaching from the west, causing already stormy south winds in the Ionian, the intensity of which today will reach locally all nine Beauforts.

From noon on Tuesday, first in the Ionian and then in the rest of the western parts, rains and thunderstorms are expected, which during the evening and night hours will move east and will affect the rest of the mainland and Western Crete.. The effects will be strong in places, while local hail is expected in the southern parts.

Rain and thunderstorms are expected in most parts of the country on Wednesday, from the morning hours, with the effects being strong mainly in the central and southern parts, while local hail is expected in the Aegean islands (in Cyclades and Crete).

Alongside, Atmospheric conditions favor the transport of dust from North Africa, resulting in the creation of the phenomenon of muddy rain.

The weather in all parts of the country on Tuesday:

The temperature will range from 20.8 ° C to 21.7. C. We will have strong winds, which can cause little discomfort to those who may be outside, since they will have to do with 6 bf with south southeast direction. Pay attention to any branch falls, if you go out.

The day is quite strange, since there will be changes in the weather many times over. The most important feature, however, is a lot of cloudiness.

We will experience many cloud formations, with only a few moments of clear sky, in the afternoon and evening.

The night, the temperature will range around 21.6. C. 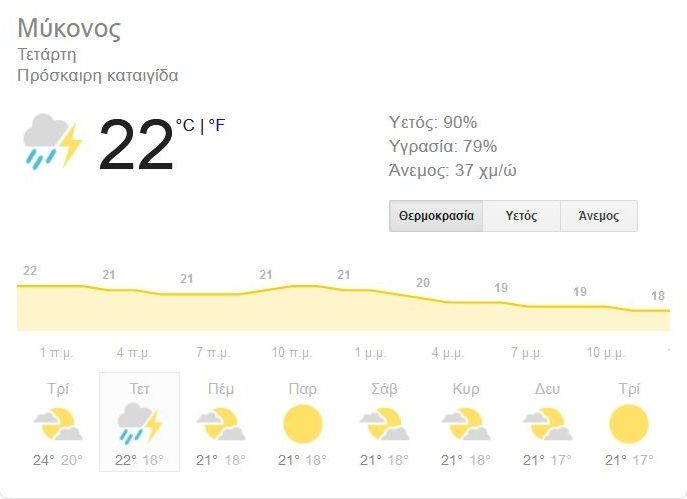 On Wednesday, rain is expected with the possibility of local storms in Mykonos and most of the country in the morning, with the effects being strong mainly in the central and southern parts.

Local hail is expected in the afternoon in Mykonos and more generally in the Aegean islands (in Cyclades and Crete).

The temperature will range from 17 ° C to 22 ° C. strong winds, that will arrive 6 bf with south southeast direction.

Weather: Cloudy skies temporarily increased with local rains early in the morning and again in the afternoon. Sporadic thunderstorms will occur in the evening.
winds: Southeast 5 with 6 bf.
Temperature: From 15 up to 23 ° C.

Weather: Cloudy with local showers and occasional storms gradually.
winds: Southeast 4 with 6 bf.
Temperature: From 12 up to 21 ° C.

Weather: Snowfalls from the west and in western and central Macedonia sporadic storms. At night in western Macedonia the effects will be strong in places.
winds: East southeast 3 with 5 bf and afternoon local 6 bf.
Temperature: From 10 up to 21 ° C. In Western Macedonia 4 to 5 ° C lower.

Weather: Cloudy with rain and thunderstorms, locally strong in the Ionian Islands, Epirus, the western Sterea and from the evening in the western Peloponnese.
winds: Southeast 6 with 8 bf, the Ionian locally 9 bf and in the morning hours temporarily until 10 bf.
Temperature: From 15 up to 21 ° C. North 3 with 4 ° C lower.

Weather: Cloudy skies temporarily increased with local rains and sporadic thunderstorms initially in the south and from the afternoon in other areas. At night the effects in the southern Peloponnese will be strong in places.
winds: East southeast 5 with 7 bf.
Temperature: From 12 up to 24. C.

Weather: A few clouds temporarily increased with local rains. Sporadic thunderstorms will occur in the afternoon in western Crete.
winds: Southeast 6 with 7 bf.
Temperature: From 18 up to 25. C.

Weather: Light clouds that will gradually thicken and from the night there will be local rains.
winds: Southeast 6 with 7 bf.
Temperature: From 19 up to 25. C. North 2 to 3 ° C lower.

We would like to inform you that tomorrow Wednesday 8 July, the crew of DEYA. Mykonos, will repair the fault in the water supply network in ...
Read more
Previous article Mykonos: New direct flights from Dusseldorf Condor, Frankfurt & Munich from May 2020
Next article Soon the new unique number to be used by citizens in their dealings with the public
Share
Facebook
Twitter
Pinterest
WhatsApp
Linkedin
ReddIt
Viber
VK
Tumblr
Telegram
Mix
Digg
LINE
Email
Print

Hagia Sofia: World monuments do not belong to one place or people, but to humanity!!