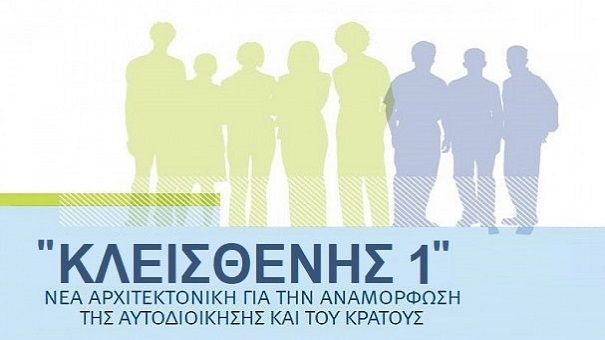 now given to 4 at noon, public consultation, and sent to ENPE, KEDE and the workers' representatives in municipalities, draft law entitled: "Reform of the institutional framework of local government -Emvathynsi Republic - Strengthening Participation Improvement of economic and development operation of OTA [KLEISTHENIS I program] - Settings for the modernization of the organizational framework and functioning of FO.DS.A - Arrangements for effective, rapid and uniform exercise of powers relating to the award of citizenship and naturalization - Other Ministry of Interior jurisdiction provisions ", and then, gave a public consultation shall.

By posting the draft law on the Site Consultations Ministry of Interior will begin today and typically the public consultation process which will end Monday, 14 May at 15:00.

According to the Ministry of Interior, "The draft law attempts a major reform incision in the Local area targeting the substantial strengthening of its operation, improve its efficiency and simultaneous encouragement of civic participation.

The draft law is structured in four (4) Parts:

In the first part included, including, proposal categorization of municipalities based on their specific characteristics, provisions relating to the primary self-governing bodies, and the new electoral system for the election of municipal and regional authorities. that established the system of proportional representation as the one in the system of local government area will lead the search and build consensus, convergence and cooperation between the parties involved in the management bodies, while mobilizing citizens and healthy forces, which have hitherto been excluded because of the distortions of the current majoritarian election system of civic participation at local and regional level.
Under the new electoral system introduced, all the seats of the municipal and regional council allocated in combinations that took part in the elections, depending on the number of valid ballots received in a’ round. If no combination not obtain an absolute majority of the total number of valid ballots, voting shall be repeated on the following Sunday (second round), only between candidates mayors and prefects of the two combinations which received the most votes.
All regular and substitute directors elected by the first vote (a’ round), according to the crosses that took everyone in this vote.
The local elections will be held on 13 and 20 October 2019, instead of in May of that year and therefore disconnected from elections. The duration of the municipal and regional period returns in four years, instead of the five years applies to the "Kallikratis".
The municipalities are divided into six categories, based on their population, the particular geomorphological characteristics, the basic features of economic activity within their boundaries, the degree of urbanization, their inclusion or not in broader urban metropolitan assemblies and their position in the administrative division of the country.

The categories are as follows:

Furthermore, disconnect the supervision of local authorities of the Decentralized Administration, enhanced participation institutions and public debate in local government and establishes the framework for the conduct of the municipal and regional referendum.

With the Part two attempts strengthening of Solid Waste Management Bodies (F.O.D.S.A.) establishing new rules of operation in complete alignment with the EU environmental acquis and constitutional and aiming at prevention of waste, the reduction of production and a, generally, environmentally sound management that covers the entire country and will help to conserve natural resources and protect human health and the environment.

With the part Three arrangements proposed for Quicker and more effective exercise of powers relating to the awarding of citizenship and naturalization.

S.the part Four down other provisions of jurisdiction of the Interior Ministry.

The views and suggestions received will be considered for the improvement of the proposed arrangements.

noted, that the provisions of Part Two have already been submitted to public consultation by the 25.1.2018 and for a sufficient time. Therefore not part of the consultation ", concludes the interior ministry.

The same bill is structured in 237 articles, It includes arrangements for the operation of Solid Waste Management Bodies (FODSA), and settings for better and faster exercise of powers relating to the awarding of citizenship and naturalization.

in any case, the first reaction was negative elected. KEDE ENPE and stressed that he only brings the bill is proportional.

What is the "EKAB BE S.A.F.E.": Operational readiness control program, training & EKAB exercises in the Health Formations of the Island country!! «Απόβαση» του...
Read more

What is the "EKAB BE S.A.F.E.": Operational readiness control program, training & EKAB exercises in the Health Formations of the Island country!! «Απόβαση» του...
Read more

From tomorrow Monday 25 In May, citizens will be allowed to travel to the rest of the country, καθώς έως σήμερα ελεύθερη είναι...
Read more
Breaking News