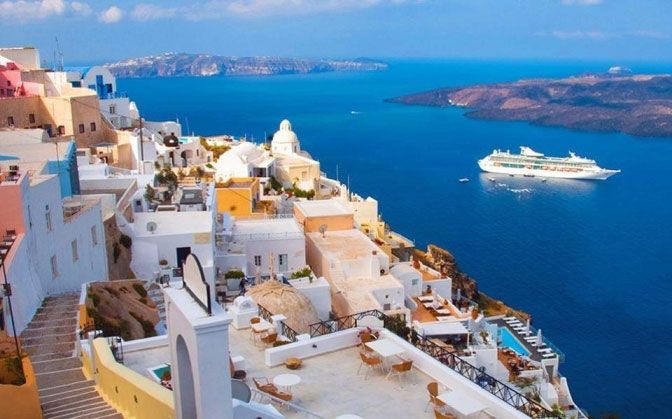 where he met with the mayor and the president of the Port Authority, and other agents involved in the movement of hundreds of thousands of tourists who arrive by cruise ships in the bay of Fira. The meeting showed that the arrivals of cruise ships, according to the schedules of 2018, coincide with certain days shown increased movement, and agreed to make arrangements to disembark hours to reduce the phenomenon of crowding.

For all cruise traffic process in Fira bay electronic system is created where the routes each season recorded, so that the control can be carried out promptly, but for the current year is expected to operate the test system on a pilot basis. also requested the dispersion of visitors tour the various interesting points of the island, so as to avoid creating congestion, due to simultaneous arrival of a large number of buses with tourists.

According to EEKFN, interventions agreed to aid service personnel exercising police in the port area and the routes to the city and other places led car large tourist stream and is necessary the presence of Traffic. The EEKFN called for improvements in the port of Athinios and allocation larger platform to serve the boatmen engaged in the transportation of passengers from the moorings of ships to land.

Few tourist destinations in the world hold the momentum that the Dodecanese and Cyclades show during the first fortnight of September. recorded 160.685 διεθνείς αφίξεις...
Read more
Breaking News

After the World Health Organization, the European Medicines Agency (MOTHER) recommended in turn dexamethasone, a synthetic glucocorticoid, for the treatment of ...
Read more
View more