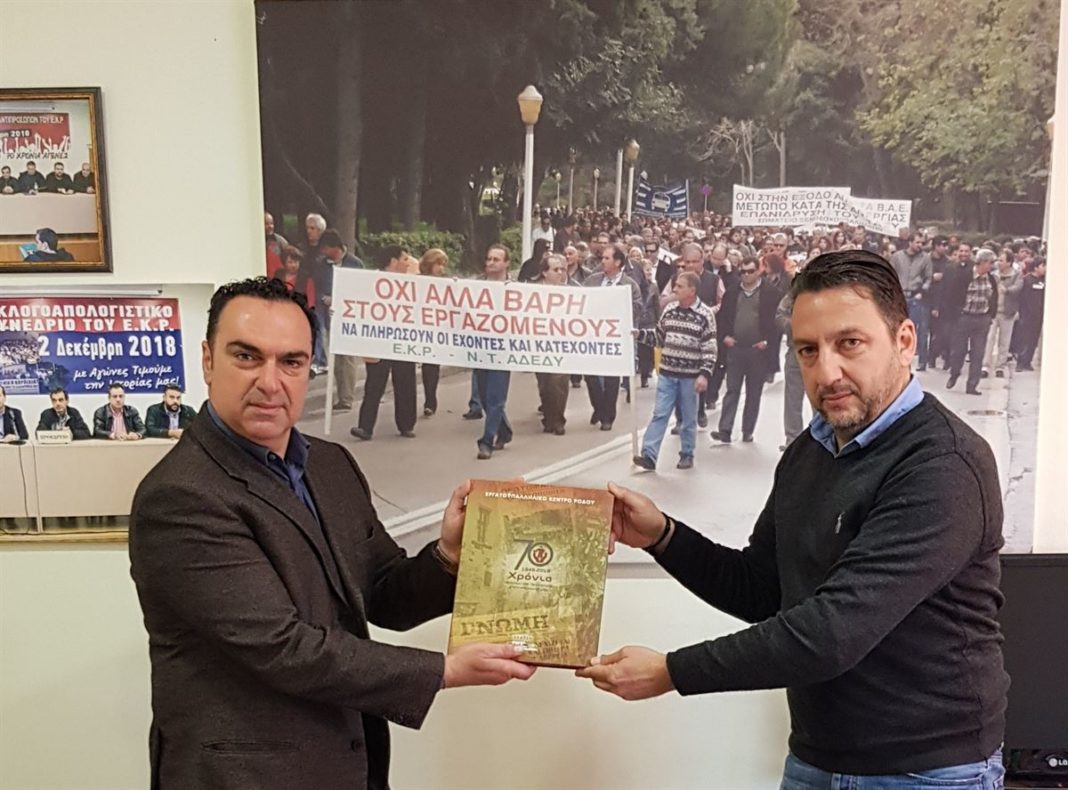 Tourism and workers in all activities relating to the at the heart of the South Aegean economy and generally the Greek economy. The unusual situation currently facing the international community on the pandemic that affects horizontal spread everywhere all fields and its consequences for tourism and industry workers are particularly difficult and painful……….

In this context the Deputy Head of Entrepreneurship Mr.. February John called a working meeting President of the Association Hotel Employees and Related Occupations Mr. Rhodes. Thanasis Stamoulis. Were consulting positions, the proposals of the Association and actions following. Mr.. Stamoulis thanked on behalf of the association and workers, Region, the Regional Director and Mr.. February for this initiative and thoroughly discussed a number of serious issues.

serious concern to the administration of the association that the public health crisis because of Covid-19 is accompanied by a corresponding very difficult economic situation and tight for the sector of hotel and related occupations. Mr.. Stamoulis said that there is anxiety to colleagues and their families for basic living issues. certainly important public health and basic position of the Association is to follow all the instructions of the Health Ministry to curb the spread of disease, a positive and dynamic cooperation with the South Aegean Region. From this starting. Hence we as hotel employees as the settlement of debts that exist in some workers from the same period last year as now our colleagues are in great need of their accrued main demand of the industry. Must somehow they can support themselves and in each case a basic labor and working right. We clarify that this number is not large because the majority but is fully paid in cases where there are debts of the season 2019 please paid directly by the operators because the subject is vital.

Then Mr.. Stamoulis developed in Antiperifereiarchi positions of the association for the extension of the existing collective agreement until August 2020. In the Municipality of Rhodes is one of the most tourist municipalities of Greece and hotels and general tourist Rhodes businesses working normally huge number of workers than with workers in their nutritional professions 30000 employed. The same analogy applies to the entire South Aegean Region.

particularly, position the club is signing the contract for the smooth functioning of all hotels. Before the crisis of public health and the pandemic of the new coronavirus is very close to signing a new collective agreement. It had been proposed during the discussion phase of the Hotel Association of Rhodes and an increase of 5 with 6%. Unfortunately before the start of formal negotiations resulted everything you know about the outbreak of the pandemic and cancellations led essentially freeze the overall tourism activity.

literally came the "upside down" in tourism, in the economy and in social life in order to show respect to our industry how difficult the tourism industry sector and its employees. We should of course expect de facto configuration of the situation and eliminate disease hopefully will return to restart the Greek and world tourism today is literally quarantined and the opening of hotels and tourism businesses.

We know that the country's economy and much more South Aegean supported, almost the whole, the financial resources of our tourist product. We are aware of the enormous damage that also captures the hospitality industry. Transfer to the Regional Director Southern Aegean Mr.. George Hatzimarkos and the Regional Authority that as social partners standing next to tourism businesses affected. The association will show understanding with requests and demands will not deviate from the measure and the sense. This is our message to Mr.. Regional Director and to the competent Antiperifereiarchi Entrepreneurship.

The President of the Association told Mr.. February that wants to inform the South Aegean Region and the local community as a whole, that the management of hotel will take within its powers and the extent of its economic power enables, initiative his colleagues those who are in full economic poverty. waited, like everyone, the start of the tourist season to work and collect their reward, but unfortunately today because of the situation in constant anguish and uncertainty. Symbolic is the movement as this only the economic capacity of the Association fund allows but will try to stand by the next time by providing food and relief items.

For this purpose, said Mr.. Stamoulis, We will get in contact with local entrepreneurs whose contribution will seek to enhance our effort and financial capacity in order to establish the extent of our initiative.

indeed, He continued saying he takes this chance meeting with Mr. Antiperifereiarchi. February and consulting matters with the Region to seek an open invitation from local entrepreneurs and businesses wishing to support the solidarity measure to hotel workers who tried to appeal to him personally as President and Society, in order to form a "basket" of essential items to workers.

While turning their gaze towards the South Aegean Region who know it alongside them to promote institutional request to the Government to provide immediate further practical measures of financial assistance of hotel colleagues and industry workers.

Important measure that could be claimed in conjunction with the Region is the proposal to the Government for granting an extension of unemployment benefits to hotel workers for April and, if necessary, and in May of the year 2020.

The Deputy Head Mr.. February stressed that the immediate priority of the Regional Authority and the Regional Director is the concentration of positions, of the situation concerns and proposals of the social partners and stakeholders and its evolution, in order to provide knowledge and support of the South Aegean Region and promotion issues and requests for the General Government and to that end will follow a series of meetings and initiatives of the South Aegean Region.

The new five euro banknotes signed by Christine Lagarde are now a fact!! She presented them herself ..... Ms. Lagarde was photographed with pride ...
Read more
Previous article Coronavirus: Only residents will be able to travel to the islands, in effect from 6p.m. Saturday's
Next article Coronavirus - OTA: Critical services must operate during the implementation of measures [Document]
Share
Facebook
Twitter
Pinterest
WhatsApp
Linkedin
ReddIt
Viber
VK
Tumblr
Telegram
Mix
Digg
LINE
Email
Print