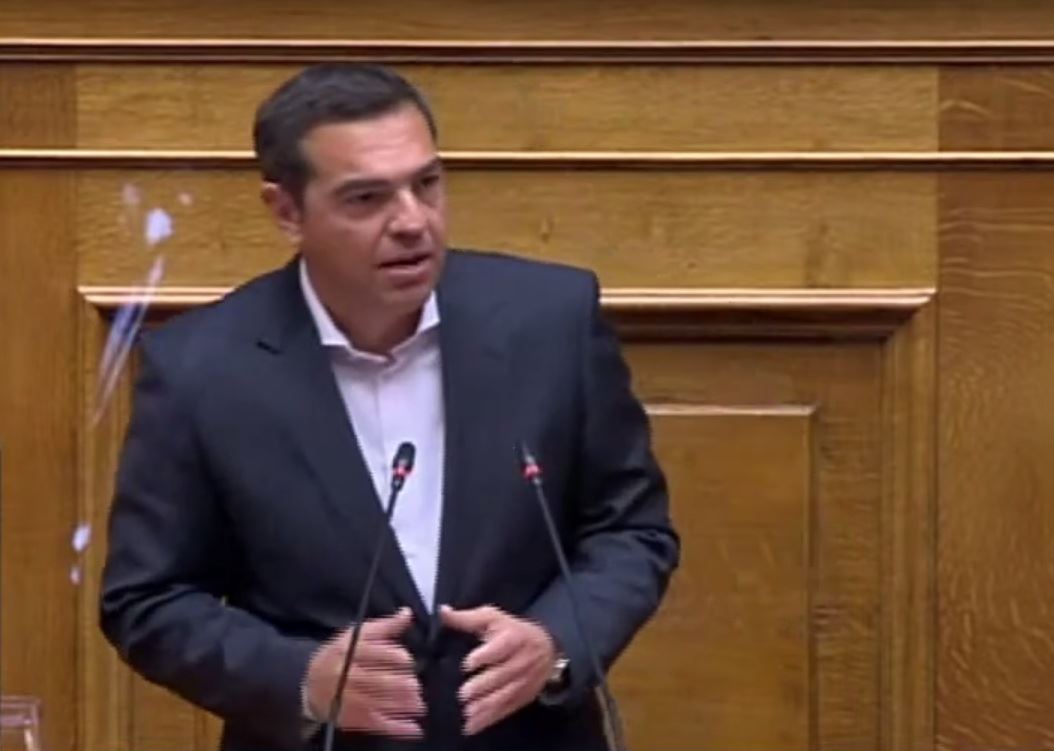 SYRIZA leader Alexis Tsipras: Greece, you need optimism, which is not to be created with sermons and television embellishments

"You have lost the trust of the people" underlined the president of SYRIZA, talking about a dance of contradictions and blatant incompetence by the government……..

For “intolerance” The president of SYRIZA-PS spoke critically of the MPs of the coalition, Alexis Tsipras, starting his speech in today's pre-day debate in Parliament on the pandemic.

"You have lost the trust of the people, watch a dance of contradictions, managerial inadequacy and obvious incapacity " underlined the president of SYRIZA - Progressive Alliance. "You came to present a success story, you appear to understand nothing " he stressed, accusing Sun.. Mitsotaki that presents an almost idyllic image of the country "With a macabre alchemy of average and creative accounting".

"It is possible for people to die and suffer, but the numbers prosper;» Al. Tsipras. as stressed, at the end of October they were lost 600 people and in five months lockdown - one of the strictest in Europe - we have 7.500 lost lives. indeed, noticed that last week we are first in Europe in mortality, showing the relevant graphs. He reported games with the numbers of those vaccinated, clarifying that just 624.000 citizens have been vaccinated with both doses.

"The incompetence of your staff has made you a part and multiplier of the crisis" continued Al. Tsipras, listing one by one the government's reluctance to manage the pandemic.

"The average citizen today does not know exactly what is going on, how much you will drive us crazy now;» underlined meaningfully, recalling that the "smart" measures proved foolish, that government officials say it does not stick to buses and the subway, but it gets stuck if someone drinks a coffee outside. "You do not know where you are and where you are, the citizen fails to understand what you are telling him " write down.

Al. Tsipras referred to a “emergency” and “dramatic” treaty in which the political debate “it cannot be of a sterile nature” but that it needs to become one “cooler search for two-way solutions”, stressing that all opposition parties have demonstrated “empathy” opposite “critical reality”, with “harsh criticism but also suggestions”.

The first, write down, They are “how to get rid of the country with the least possible losses from the siege of the pandemic and the economic crisis” and the second, added, They are “which way should we take, not from tomorrow, but since yesterday, to leave behind the difficult years and give a new hope and a new perspective to the world of work and creation” and “primarily to young people”.

“We, to put it simply, to discuss, to suggest, to disagree, with respect to the truth. With respect to the needs of the people. With respect to the thousands of dead and those who are currently being tested in suffocatingly full hospitals. With respect to the anguish for today and tomorrow of those who see their income evaporating and threatened. And in the anguish of those who seek a way out of their personal and family impasse”, said the leader of the official opposition, stressing the need for a new optimism that will not be commensurate with it “success story” of the Samaras government during the crisis. “But it is not going to be created with rhetorical schemes, meaningless controversies, sermons and television grooming. Nor, of course, with rigged trials, persecution of political opponents of the government, divisive choices, police repression, and propaganda storm”, highlighted.