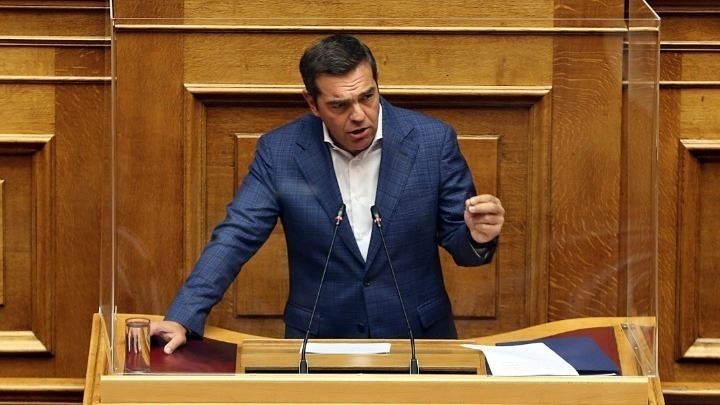 SYRIZA leader Alexis Tsipras: We put the television impunity in order, while you have given land and water and tens of millions of state money with the Petsa lists

An attempt to "criminalize" the political controversy, for "divisive plan" and for "revenge policy" he blamed the government and, personally, to the Prime Minister, Kyriakos Mitsotakis, the president of SYRIZA-PS, Alexis Tsipras, in his speech in Parliament in the context of the debate on the establishment of a parliamentary committee to conduct a pre-investigation examination of the former minister of the SYRIZA government, Nikos Pappas on the issue of licenses of private channels………..

Speaking in high tones, Opposition leader says "proud" that SYRIZA government tried to bring order to the broadcasting landscape, stressing at the same time that he feels "politically strong" because he does not owe anyone.

Al. Tsipras began his speech by accusing K.. Mitsotaki for "political cowardice" and claiming that he is not in Parliament today because "he has no arguments", "Can not refute the political discourse" and "take political responsibility" that "at a time when he should plan the health crisis", to have as a "unique plan" how to "stain, will slander, will target and criminalize the political life of the place, targeting its political opponents ".

"Instead of bowing carefully and responsibly over the problems that the crisis creates and your policy multiplies, you are trying to turn Parliament and Justice into laundries of your politics and tools to tarnish and persecute your political opponents. ", said characteristically the president of SYRIZA-PS, while at the same time reiterating his view that the government is “"out of reality". "Where is the progress?, social normalcy, political moderation, placed by Mr.. Mitsotakis pre-election;», uncertain, contrasting that in the end what even the ND voters received from the current government is "repression, propaganda, and criminalizing those "who are considered" dangerous to her power ".

Al. Tsipras also made reference in the late 1980s, arguing that "as a faction and as the Mitsotakis family" they should have drawn their own conclusions from the attempt to "stain" their political opponents at the time and how this "turned into a boomerang". "However, attempting the same failed toxic and divisive plan today, special occasions, proves that you are completely out of place and time.

And in everything,as to the inspirer and director of the project, proves in this way in addition to being in a panic, that he is a divisive, under the circumstances and ultimately a dangerous prime minister ", added, while he stressed that the government's response "to the drama of the hospitals and the million deaths is the persecution of Nikos Pappas". "Because after decades we finally put order in television impunity, at a time when you have given land and water and tens of millions of euros of state money with the Petsa lists to dozens of media outlets to incense you;», added and wondered how many pre-investigations SYRIZA should cause once it returns to government.

"We were the government that took on the difficult burden of a bankrupt country with empty funds and scandals of billions to burden the country but we drew a line and said to move forward," said Al.. Tsipras, saying that the previous government operated with "the truth in mind, justice and not with vindictive revenge against those who owed billions to the Greek people in 2015 ", referring to the "Novartis global scandal".

in addition to, accused the government of wanting to set up special courts and of sending the message that "anyone who dares to investigate systemic scandals will be prosecuted". "Not a message from the party, not of the ruling family, but a message from the regime ", he said and characterized “oxymoron” and “world originality” that the "special courts they are trying to set up" are not only "without evidence" but also "without the issue of damage to the Greek state", "But on the contrary", because with the actions of N. Pappas and the SYRIZA government "infringed on private financial interests for the benefit of the State".

In this context, The official opposition leader blamed the government for using the case as a distraction that would "get it out of the deadlock of the health and economic crisis" and that "have imprisoned the country in insecurity and fear"., stating that they are not "fundamentally serious" in the coalition "if you believe that the persecutions, the repression, the deafening propaganda, the lie, and finally the judicial parodies, they can get you out of a really awkward and very difficult position, which you are in for what you have done and especially for everything you have not done a year now, for your policy that has led us to these impasses ".

continuing, Al. Tsipras noted that the former minister, Nikos Pappas outlined what happened in those days and stated that he would try to give political answers, talking about "brave effort" of N.. Pappas and the SYRIZA government to "put order in the radio and television landscape that on 30 consecutive years all governments left unregulated ". "You accuse SYRIZA of being a scandal that applied the law and the Constitution while the real scandal was yours: the fact that for decades some businessmen had public frequencies without permission and without any obligation to the State and their employees ", underline and refer to the phrase “entanglement regime” of Konstantinos Mitsotakis and “scammers' regime” of Costas Karamanlis.

"If I am proud of something but also politically strong, it is that I do not owe anyone, we do not owe anyone. Mr. Mitsotakis, do you know how many people are arguing about the fact that because of them he was elected Prime Minister?. How many are there who quarrel among themselves over who has the greatest responsibility;He noted in high tones and added: "If you want, Well, to set up a special court in SYRIZA because it put media owners to put their hands in their pockets, while you now come and give them, go ahead, you have a majority ".

"Have you understood what is the issue you are opening and at what time you choose to throw this toxic poison into the political life of the place?; You open the topic of information. You reopen the issue of the entanglement of economics with political power. And when; At a time when you have finished it. At this time you are talking about a rope in the house of the hanged man ", stressed the president of SYRIZA.

"So set up expediency trials for your political opponents. With the main accusation that they dared to force the entanglement to comply with the Constitution and the laws. Choose the path of criminalizing political life and division. Just so you know, this road is both slippery and dangerous for the one who chooses it. Historical experience teaches us that every time something like this was attempted, not only democracy was injured and the country and the political system were damaged, but mainly the faction that inspired it. We will not follow you p’ this division ", underlined and concluded that “the combination of incompetence and failure in crisis management, with arrogance, your authoritarianism and anti-democratic practice, creates an explosive mix in Greek society ".