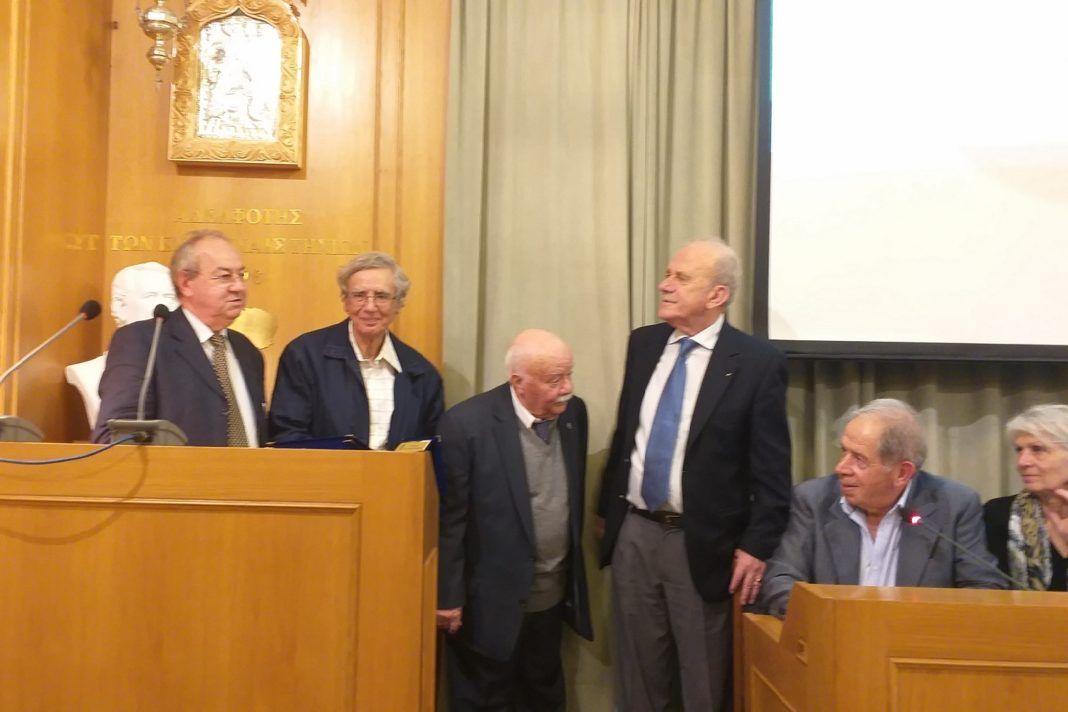 Honored personalities E.KY.T. Tinian Brotherhood and for their contribution to the promotion of Cycladic Civilization

On Wednesday 13 November 2019 and time 19.00 Events in the hall of the Brotherhood of the Athens Tinian, the Cycladic Press Association and the Brotherhood of the Athens Tinian honored masters George Amiral – Philologist -Syngrafea and Alekos Floraki, Folklorist - Ethnology and poster for the long and valuable contribution…… of the cultivation and promotion of the spiritual culture of Tinos and the Cyclades widely.

3) Mr.. Emmanuel Sochos, Councilor and Head of Culture of the Municipality of Tinos

Mainly of speeches preceded greetings of the President of E.KY.T. K. Theodorou - Gerasimos Maganioti and President of the Brotherhood Tinian Mr.. Emmanuel Skare.

For Prof.. George Amiral spoke Mr.. Manthos glass, Professor of Education / ing Center Merchant Marine and Publisher of the newspaper "The Voice of Karya 'on: "The personality and the spiritual work of Mr. George Amiral ".

For Mr.. Alekos Floraki were heard Mr.. Lazarus Theophilus, Chemical, Former Provincial Governor Naxos and former President of E.KY.T. on "The offer of Alekos Floraki culture ' and Manolis Sergis, Professor of the University of Thrace, on "The poet and folklorist Alekos Florakis".

Then engaged by the Presidents of the Union Cycladic press and Tinian Brotherhood honorary plaques to honored that and closed the by few event, from step.

The event was coordinated by Mr.. Anthony Tziotis, Secretary of E.KY.T. and Mrs. Evangelia Kontos, Superintendent of E.KY.T.

Finally it was offered friendly treat to come from the Brotherhood of Athens Tinian.

"We must reactivate our national vaccine, which is nothing more than our ambition, and together we must abide by the measures..
Read more

Authorities say the tragedy may have been caused by a large amount of ammonium nitrate being stored. Rescue crews continued to search in the morning ...
Read more

With a complete exemption from any tax or with a very minimal tax burden, a young person can now, unmarried or married, to buy a first home ..... With change ...
Read more
Previous article Imminent the first contraceptive pill that can be taken only once a month
Next article Panhellenic 2020: The way the examination of test courses over Greece [The decision]
Share
Facebook
Twitter
Pinterest
WhatsApp
Linkedin
ReddIt
Viber
VK
Tumblr
Telegram
Mix
Digg
LINE
Email
Print

Coronavirus Disease: 124 new infection cases – the 15 at the entrance gates, a new death

124 New confirmed cases of coronavirus cases , of which 15 were found after checks at the country's gates and a new death ...
Read more
View more