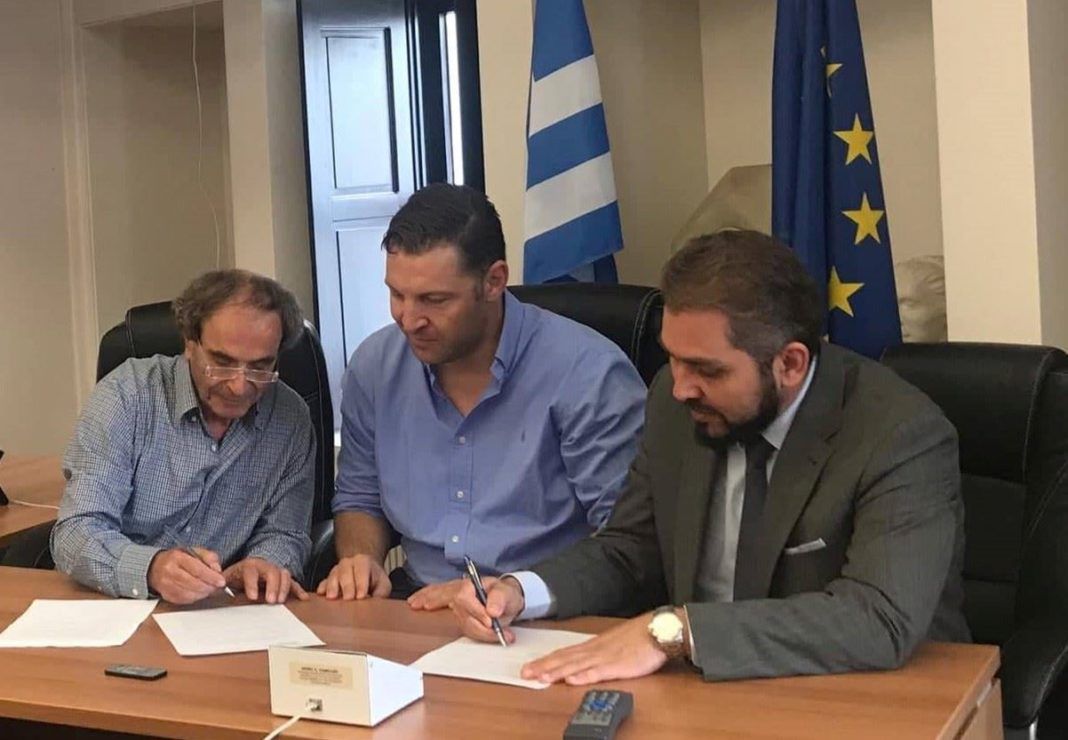 Tinos: He sealed the agreement with the Hellenic Seaplanes for siting and licensing of waterways

The creation of waterways Tinou passes in progress.

Remarkable day for the tourist development of Tinos, the third 19 Since October sealed the agreement on the siting and licensing of the waterways of the island with a common aim to be ready to use the tourist season 2020………..

The agreement was signed in Tinos town hall to present the Mayor. John Siotis, President of the Port of Tinos Fund – Andros , K. George Santamouris and President and CEO of Hellenic Seaplanes S.A., K. Nicholas Charalambous.

During the meeting, extensively discussed both the existing legislation governing the operation of seaplanes and waterways as the changes in the new regulatory framework that promotes the government, accelerating the processes and making the next season longer nodal, to see seaplanes to apothalassonontai.

Moreover, the agenda of the meeting included the analysis of actions needed to be methodically, and in time the first steps of the construction and operation of waterways, in terms of Hellenic Seaplanes.

communication that Mr worth mentioning. Charalambous during its presence in Tino, the South Aegean Prefect Mr.. George Hatzimarkos, who is a supporter of the ambitious project of seaplanes and under the gaze signed in early September the contract for licensing 20 waterways in the South Aegean Region.

All confirm that the government's commitment to flying seaplanes ylopoieitaikai the Hellenic Seaplanes initiate the necessary procedures to Tinos is one of the first islands in the Aegean season 2020 will know seaplanes.

Read 14 Highlights first and Back-Cover of Sunday Newspapers, only occasionally circulating tomorrow Saturday 15 August, due to the feast of the Virgin (or...
Read more

Coronavirus Pandemic–Measures: The bars close in Attica after midnight & restaurants – Measures on the islands, until 50 people at weddings

Deputy Minister of Civil Protection Nikos Hardalias announced the new measures for the coronavirus, as the spread has reached alarming proportions and several areas are located ...
Read more

Coronavirus Pandemic – Education: At the table is a proposal to open schools at the end, not in early September

New "bomb" in the smooth operation of Education and the opening of schools from September, seems to put the coronavirus. According to exclusive information of in.gr,...
Read more

Appeal to our young people for attention!! To take responsibility for both their individual health and the safety of society, and "yes ...
Read more
Previous article What are the tax cuts to businesses and individuals in the Budget 2020
Next article Emergency medicine revoked by the EMEA!! Can cause infertility!!
Share
Facebook
Twitter
Pinterest
WhatsApp
Linkedin
ReddIt
Viber
VK
Tumblr
Telegram
Mix
Digg
LINE
Email
Print

Watermelon!! The lord of the summer!! Ten Reasons to book!!

East Med Tensions-Dendias: Turkey is solely to blame for the escalation of tensions in the East. Mediterranean

Turkey is the only one to blame for the escalation of tension in the Eastern Mediterranean and must leave the Greek continental shelf immediately, τόνισε...
Read more
Breaking News

Read 14 Highlights first and Back-Cover of Sunday Newspapers, only occasionally circulating tomorrow Saturday 15 August, due to the feast of the Virgin (or...
Read more
View more