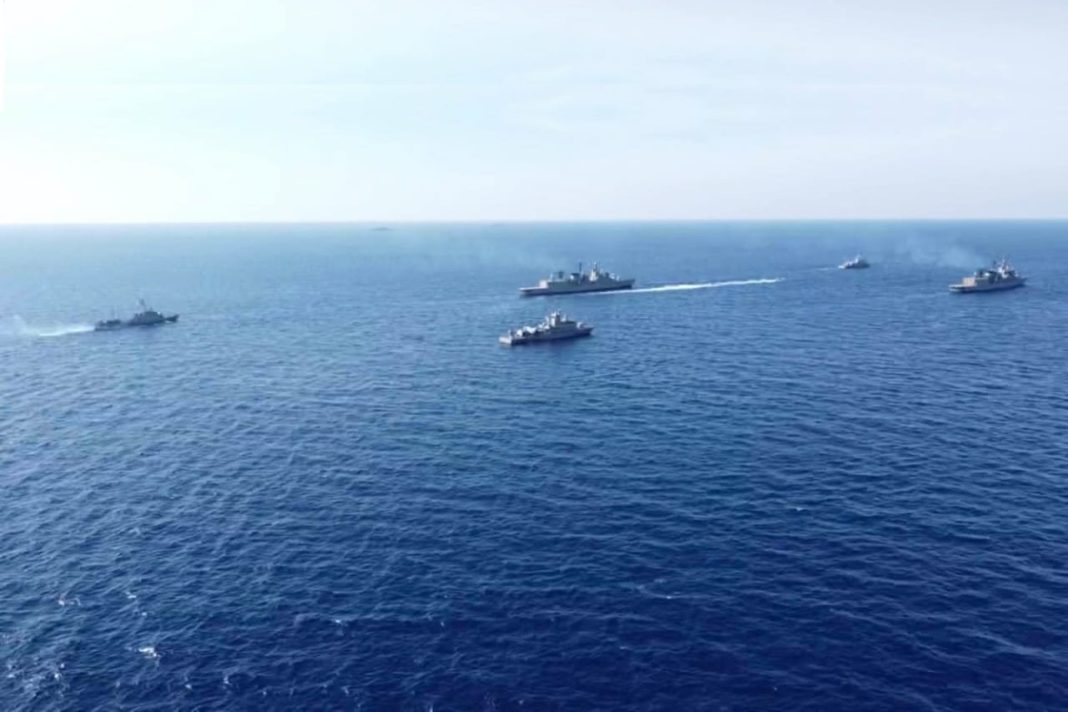 Navtex is extended by the Turks for Oruc Reis!! Expansion of research in Rhodes and Crete!!

O Greek fleet βρίσκεται σε διάταξη μάχης στα 6 nautical miles from Kastelorizo, as revealed by the photos released by the Ministry of National Defense, for the first time since the beginning of the Greek-Turkish crisis.

This alone is a proof that Greek-Turkish relations are acrobatic and that the diplomatic effort to de-escalate does not yield the expected results for Athens., as a result, the Greek side wants to project to the "outside" the level of readiness of the Greek armed forces.

In the photos with at least five Greek warships in line, a wall appears to have been created in 6 nautical miles from Kastelorizo, that is, at the border of the Greek coastal zone. In some of the photographic snapshots, the Oruc Reis can be seen in a visible distance, accompanied by five Turkish warships and the escorts of Ataman and Cengiz Han..

It is not specified whether the photo captures the entry of the Turkish fleet within the boundaries of the zone of 12 nautical miles off the coast of Megisti.

Nor is it easy to see whether the Turkish research ship has indeed laid the five-kilometer-long cables that Ankara claims were submerged in the sea as part of a two-dimensional seismic survey..

The military personnel have once again been put on high alert, with our Warships being deployed in the area of ​​Turkish challenges taking key positions, ready to react, in accordance with the guidance and mandates of the political leadership, "a senior military source told protothema..

At the same time, The pilots of the Greek fighter jets are also on high alert in their squadrons, while the Army formations have put their units on full alert, remaining on immediate alert, points out the same senior officer of the Ministry of National Defense.

Invisible chase at the bottom of the Aegean

An invisible chase is underway at the bottom of the Aegean between Greek and Turkish submarines.

Information states that as of Monday 12 October until yesterday Tuesday 20, Greek navy has spotted at least three Turkish submarines moving in the southeastern Aegean.

The Turkish submarines were located by Greek surface warships that used their anti-submarine devices, that is, their sonar, and their radars but also from helicopters of the Greek navy.

In another photo, one can distinguish Oruc Reis, which is accompanied by five Turkish warships, but also its two companions, Ataman kai Cengiz Han.

It is recalled that yesterday, Third, the Turkish seismograph reached a breathing distance, to 9 nautical miles from Kastelorizo.

Look at the pictures:

New Safak: Navtex to be extended for Oruc Reis - Expansion of investigations in Rhodes and Crete

Extension of the Turkish Navtex for the Oruc Reis is expected tomorrow, according to the pro-government Yeni κafak newspaper, which adds that investigations will continue south of Kastelorizo ​​and east of Crete and Rhodes.

The Oruc Reis will remain in the Eastern Mediterranean, the current Navtex - ending on 22 October- will be extended and investigations will be extended south of Kastelorizo, east of Crete and east of Rhodes.

This is what the pro-government Turkish newspaper Yeni Safak reports today under the headline "Oruc Reis remains".

Yeni Safak - as reported by the SKAI correspondent in Istanbul, Manolis Kostidis - notes that the works are expected to continue south of Kastelorizo, east of Crete and east of Rhodes.

If the information of the pro-government Turkish newspaper is true, which often becomes the forerunner of Erdogan's decisions, then there is the possibility that Oruc Reis's investigations may be extended to the Greece - Egypt agreement region.

💢#Turkey state affiliated media outlet #YeniSafak says that #Oruc_Reis NAVTEX will be renewed and its surveying area will be extended near #Greece islands of Rhodes & Crete.

1914 New confirmed cases of coronavirus cases, and 35 New deaths have been recorded in the last 24 hours in our country, bringing the total cases to 56.698 and...
Read more
Municipal council