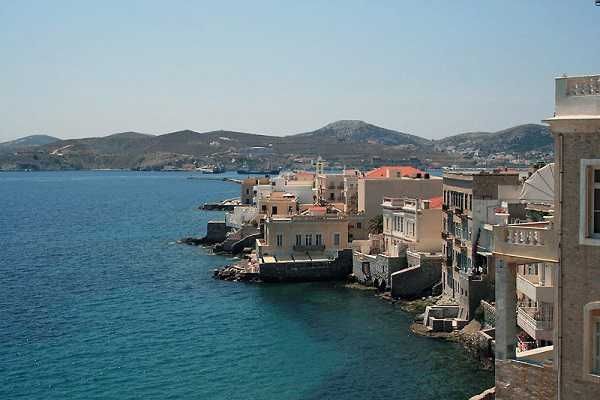 Wealthy refugees from Chios, Psara, Kasos and Crete, coming in Syros after the devastation of their homelands during the Revolution, They built their mansions in such a way over the wave, like ships, which caused its name Vaporia Syros.

The houses in Vaporia Syros was high-ceilinged, adorned with frescoes, marble balconies, wooden floors and carved wooden doors. It was the prestigious district of the 19th century city. Here lived the richest people of Syros, the vaporierides and industrialists. Among the rocky coast of Syros Vaporia district formed small beaches suitable for swimming, such as the beach Star. The houses in the area owned by three generations and their history record these social changes.

From the first generation, until 1840 about, few survive. In the prestigious district Vaporia Syros dominates the imposing church of St. Nicholas of Rich, as is customary to say, with castellated bell towers.

During the Revolution, the North Sea and Cretan refugees settled in the island of Syros. There they built unique high-ceilinged mansions with impressive frescoes, carved doors, marble balconies, wooden floors and unparalleled detail by the sea creating, so, their own captain, their own steamers that seemed to hover over the rocks.

Since the 19th, Well, century onwards, The district took the hitherto known name Vaporia and still known as the most prestigious district in the eastern part of Syros.

It is a beautiful and picturesque area with a great beach, called Star, suitable for swimming and for relaxing summer wanderings. The area is worth visiting, also, the church of St. Nicholas of the rich dominating the castellated bell towers.

In the prestigious district Vaporia Syros dominates the imposing church of St. Nicholas of Rich

EFET: Five key moves to keep food from spoiling in the summer!! EFET on the occasion of the fact that a large number of foodborne infections have been recorded internationally..
Read more
Coronavirus - coronavirus