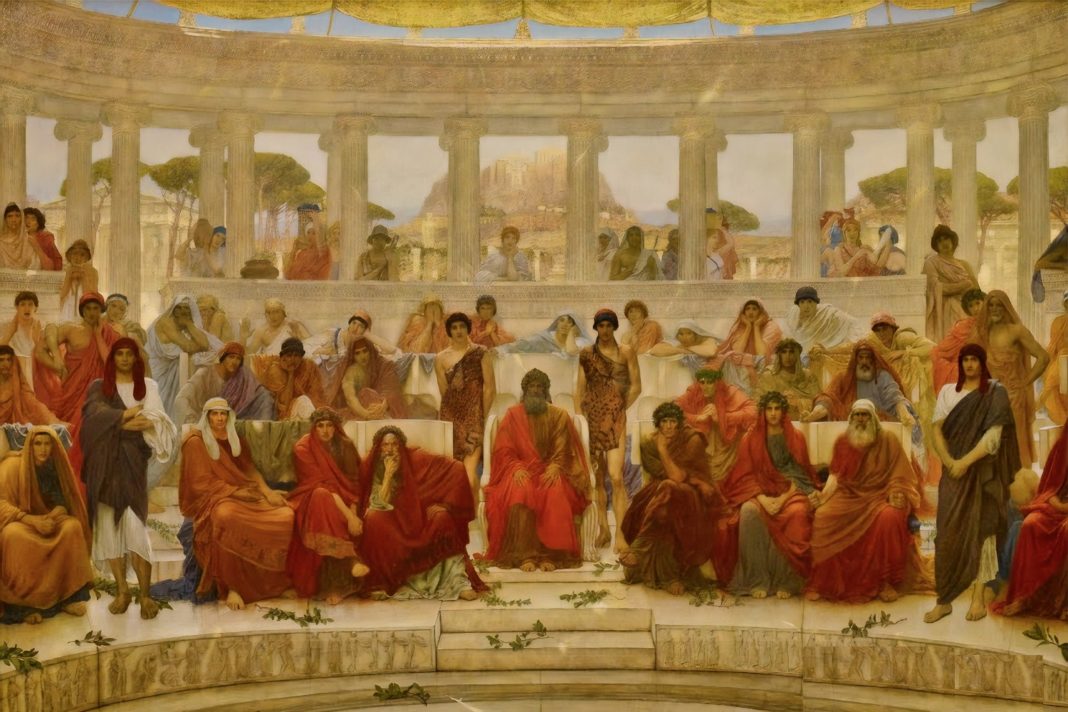 World Day of Theatre 2021: The Greek Theater before and after the Revolution of '21, on the occasion of World Theater Day!!

World Theater Day 2021!! The Greek Theater before and after the Revolution of '21. On the occasion of World Theater Day, a topical issue: “Contemporary drama performances with ancient and modern themes renew the Greek struggle for primordial freedom”…….

World Theatre Day 2021 Theme raises the importance of theatre arts, how they played an important role in the field of entertainment, and the changes that theatre brings in life. Here’s all you need to know about the day.

World Theater Day 2021 raises the importance of theatrical arts, how they played an important role in the field of entertainment and the changes that theater brings to life. Here's everything you need to know about the day. 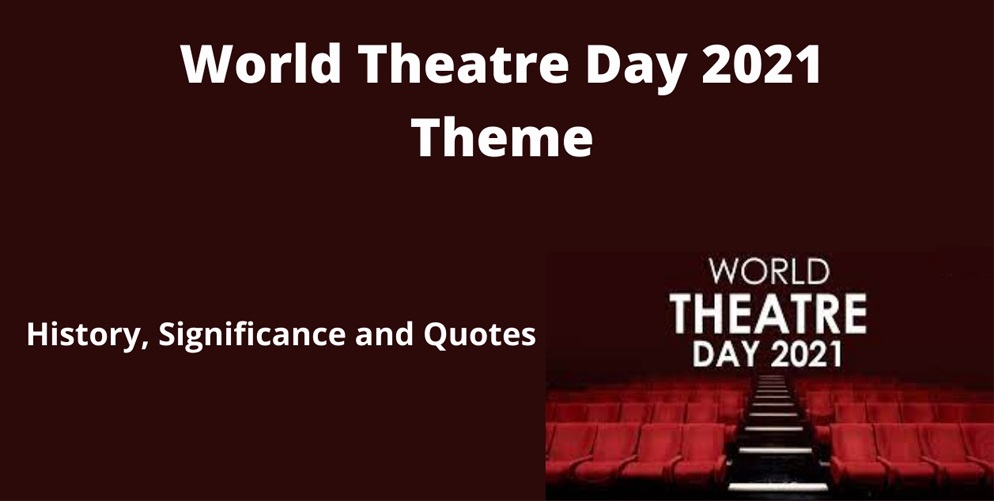 OR Helen Mirren (Ellen Mirren), perhaps the most influential "Cassandra" I have ever watched in the tragedy "Αγαμέμνων»In excerpts from the only trilogy of Aeschylus, the «Oresteia», in a television production by the BBC, in her message for World Theater Day highlights the occupational impact of the pandemic on artists and the occupational "recovery" after Covid.

The prophecies so far have been painfully verified for the theater, however the art of performance always exists as the important helper in the need of people for redemption and social purification.

In the Balkans 19The century, Poetry is the ultimate vehicle of realistic reconstruction for the inner vision of Freedom.

The Enlightenment and the demands of classicism return the immortal ancient spirit to Greece.

THE Dionysios Solomos writes 1824 to Ioannis Tertsetis that the gap between Greek antiquity and modern Hellenism is bridged by the coming of Jesus and why only antiquity helps in the original creation.

The pre-revolutionary theater, just like the ancient drama from Athens 5The century. B.C. and from neoclassical France, classical theater is poetry, therefore metric reason.

In the neighboring peninsula, the Italians like the contemporary Alfieri, although he was a counter-revolutionary, he composed Greek tragedies around the end of the 18th century in eleven syllables, with themes from the ancient dramas of Agamemnon, Antigone, Polyneikis, Orestes, Merope and two versions of Alkisti, published post mortem.

Respectively, the French are the same as the neoclassical 17The and 18The century compose the ancient tragedies in a rhyming eleven-syllable verse, such as Voltaire in Alexandrian verse Oedipus and Merope (The Greek translation is finally preserved in a printing house in Bucharest in 1820), but mainly Rakinas in the Greek tragedies of "Thebes", "Alexander the Great", "Mithridates", "Andromache", "Iphigenia", "Phaedra", directly drawn from the mythological spectrum of Homer and Hesiod, as Herodotus points out to us about epic poets (2.53).

The three Greek mythological circles, the Theban circle, the Argonaut cycle and the Trojan cycle fertilize Tragedy in post-Renaissance Europe.

The date of the first performance in the Hegemony is included in the post-action Riga Velestinlis awakening of the rays in the Balkans and the same year the Greek Prefecture is printed anonymously, namely Speech on Freedom, a fiery text of political rebirth of the young Greeks through education and democracy as an institutional state.

Alongside, The Serbian Revolution is raging in the Balkans (1804-1813) and in the eastern Aegean, Samos proclaims the Revolution on its own without any other support, this is the Samian movement of the Carmanioli (1805-1812). When the "Hellenic PrefectureIs printed in Italy 1806 is anonymous because the revolutionary action of the slave slaves, even outside the Ottoman Empire, immediately led to imprisonment and often the death penalty (Rigas and Alexandros Ypsilantis were imprisoned by Europeans, not by the Turks).

The early constitution of the Greeks is dedicated to Riga which really laid the new foundations of the Hellenic Republic, Rigas is the ethnarch. 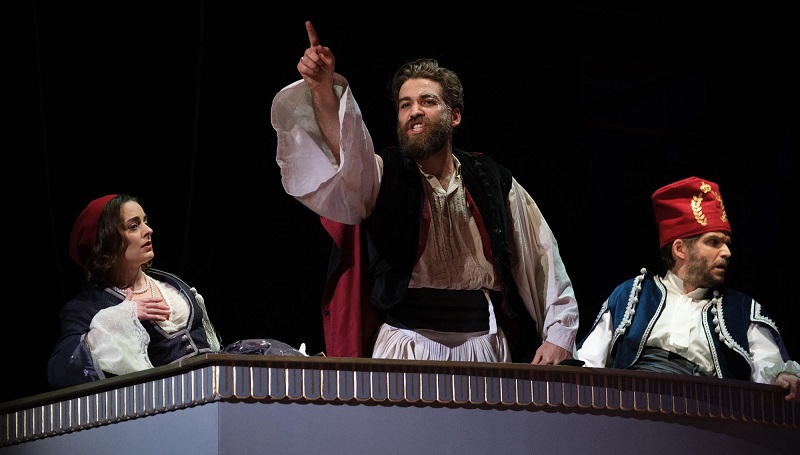 To Thucydides and earlier to Herodotus the word "revolutionIs used for the first time in history as synonymous with state diversion, both reports on the island of Samos.

The lover of the Aegean, the poet Odysseus Elytis, wrote that there are coincidences that should be ashamed. From the east of Hellenism to the icy waters of the Danube, the thinking Greeks first rise spiritually and then take up arms in a war between David and Goliath..

The Holy Corps of Alexandros Ypsilantis is the yeast from the pre-revolutionary theatrical effervescence of the Academies in Moldavia at the beginning of 19th century. Sources, for example, report that Rakina's play "Phaedrus" was staged in Bucharest in December. 1818 until April 1819, while from April and all summer 1819 his "Merope" was played in Greek Voltaire.

One of the most beautiful modern depictions of this classic work of Rakina with the National Theater of Great Britain and with Phaedra Helen Mirren I had the pleasure to watch in a measured adaptation of the British poet Ted Hughes the 2009.

Back to Moldavia, The pre-revolutionary performance in Bucharest had a great impact and was, after all, the first time that female actors on the occasion of "Phaedra»Were included in the troupe. The members of the theater group in Bucharest were Athanasios Christopoulos, Nikolaos Skoufas, Georgakis Olympios, Iakovos Rizos-Ragavis, Konstantinos Kyriakou Aristias, Theodoros Alkaiou and Mrs. Marigo Alkaiou and Maria Pappa-Ioannou.

In the revolted Samos during the Samian State, the young Light Sword translates the two key works from French, the warlike Mohammed of Voltaire and the vindictive Phaedra of Rakina. indeed, A copy of the translation of the French work "Fanaticism or the Prophet Muhammad" by Samiotissa Spathi is available today at the Anemi Digital Library from the University of Crete. 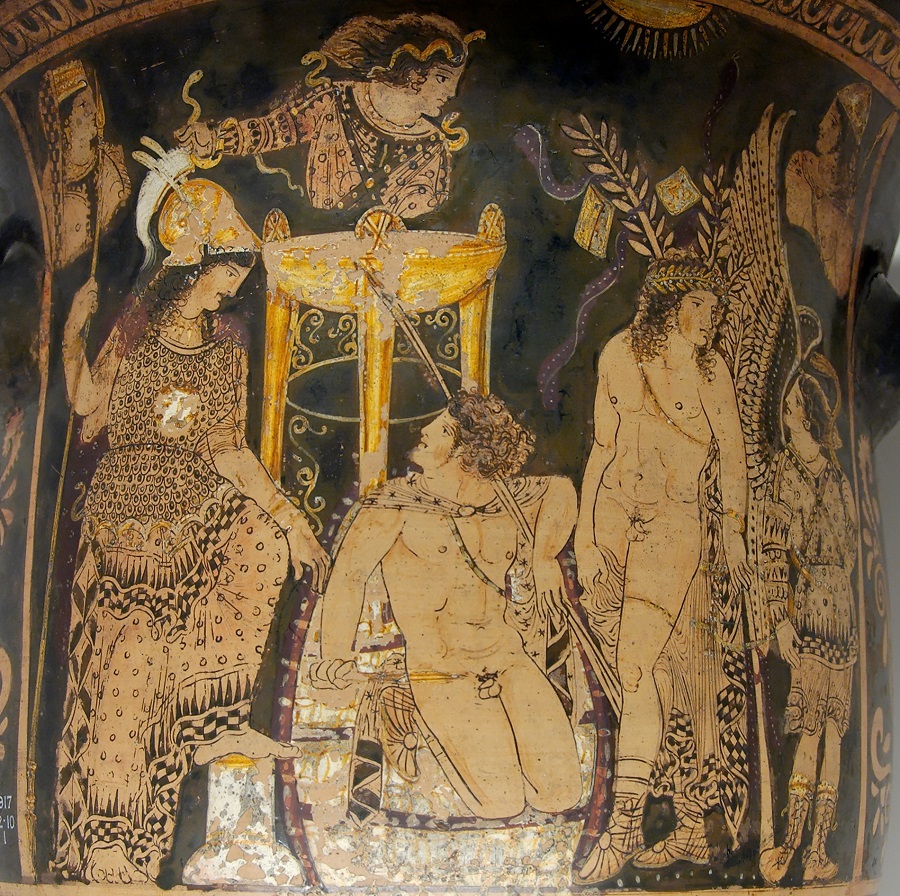 An adoring dimension for the heroes of '21

With the Revolution, things change and become more topical. The heroes of '21 acquire a cult dimension because the result is national independence beyond all expectations and with an unequal struggle on the battlefields with epidemics and great hardship..

A central theme of the theater, before and after the Revolution, indeed the epidemic spread of diseases remains, in the same way that concerns us now.

Tragedy and comedy are public history.

Thucydides for example in 2The A book in his "Stories" narrates the historical plague of ancient Athens from 430 B.C. until the 426 B.C. in just seven paragraphs (Thucydides, Book II. 47-54), in a landmark text that constitutes the first world historiography.

Pericles' friend, the poet Sophocles, soon represents the death of the leader Pericles in the well-known plague in the tragic drama "Oedipus the Tyrant" (428 B.C.). Centuries after the classical era, the famous historically and literary plague is repeated by Iakovos Rizo-Neroulos in "Aspasia" (1813).

The tragedy "Aspasia" in three acts is an original work by Iakovos Rizos-Neroulos, with Dance women from Miletus, the following of Aspasia.

When the epidemic breaks out, Pericles sends her back to Miletus in Ionia, where she comes from, to protect her, but she returns suddenly and looks for him.

In the tragedy, Hippocrates takes the stage, Socrates and Nicaea, but never Pericles himself, who rather died of the plague, star in his absence.

The tragedy "Aspasia" is a pre-revolutionary depiction of wintering Greece from the Ottoman occupation for so many centuries or otherwise waiting for Pericles, an allegory for the democracy of the Balkan Peninsula.

The epidemic as a subject survives after the Revolution, for example in the comedy "The Journalist" (1837), where Iakovos Rizos-Neroulos restores the spread of the disease in modern Aigio when a ship from Malta anchors in the Achaean town.

Let us remember that the Revolution intra muros begins with Βοστίτσα, then renamed to Aigio just the 1833, when the Bavarians want the purification of the words of the Turkish period.

However, no one ever changes history as a real tragedy in practice.

PM Mitsotakis: What will happen to the economy, it will look like the end of a war – What he said about Dendia, Easter, vaccine and Erdogan