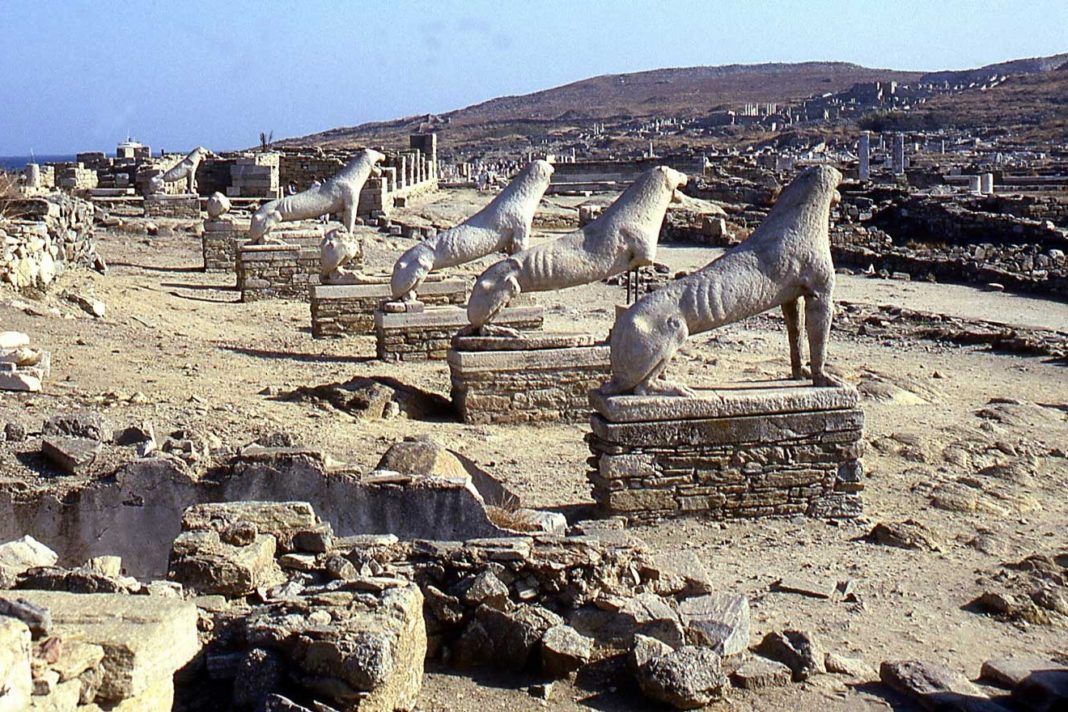 Unique throughout the world is the island of Delos, as the largest natural island archaeological site. No other island hosts so many monuments of archaic, classical and Hellenistic times and is why it is a UNESCO World Heritage Site……

No one stays on the uninhabited island, with visitors arriving daily from the neighboring islands for an unforgettable and magical experience.

Every traveler enjoys a unique tour of the revival of ancient Greek culture on the island that “baptized” the Cyclades, as an island cluster that circulates around it.

The sacredness of this beautiful place is due to the myth of the birth of Apollo and Artemis. According to legend, Delos was a floating island until Poseidon immobilized it at the request of Zeus, to offer it a shelter in Leto.

When Zeus “fell in love” with Leto and she became pregnant, she faced the wrath of Hera, Zeus’ wife. So Zeus begged Neptune to help find any shelter for Leto to give birth to his children. Poseidon took the invisible rock – Adilos – and found a rather protected place among the other islands and renamed it Delos (obvious).

Delos had already been inhabited since 2500 BC. and according to archaeologist PI Hatzidakis, residents built their elliptical huts at the top of Kynthos hill. The island was also inhabited by the Mycenaeans in the 15th century BC, when it spread to the Cyclades.

After the end of the Persian wars, the Solar Alliance was founded, an alliance of city-states in which Athens had the primacy. In Delos, the seat of the alliance was the common treasury until 454 BC.

The city, which visitors today see, was developed after 166 BC by the Romans. The island’s prosperity and commercial exploitation is due to its duty-free port, making it a major trading center.

At the beginning of the 1st century BC It is estimated that about 30,000 people inhabited this small island of 3.4 square kilometers. Due to its sacred nature, Delos did not face any raid risks, however, in 88 BC. the king of Pontus Mithridates proceeds to plunder the island and in 69 BC. the island receives another catastrophic raid by pirates.

The excavations that took the island out of obscurity started in 1873 by the Athens Archaeological School and continued from 1904 until 1914. The findings are kept at the Delos Museum and since 1990 the entire island has been designated a World Heritage Site and is protected by the UNESCO.

When the traveler begins his tour of the archaeological site, he will see a cobblestone square surrounded by temples, the so-called 2nd Century BC Marketplace. The buildings to the south and east of the square housed commercial shops, but most of the activities were done outdoors. Most know the island for its famous Leo Road.

The authentic marble lions are kept at the Archaeological Museum

The Lions Road with its marble lions was built in the 7th century BC. century, when the inhabitants of Naxos wanted to thank God for some of his goodness. It is noted that the lions you see today on Leonton Street are imitations of the authentic ones, since the marble lions are kept in the Archaeological Museum.

One of the most important sights of the island is the temple of Isis, where inside it is the statue of the goddess, patron sailor. The temple is located at the foot of Kythnos hill, which rises up to 113 meters above sea level. The temple was built in the early 2nd century BC. and was repaired by the Athenians in 135 BC.

The temple of Isis

In the archaeological site of the “priestess of the Cyclades” is also the famous mosaic in the house of Dionysus (2nd century BC). It is a mosaic depicting the god Dionysus with open wings, crowned with ivy.

The route that visitors take to luxury homes – such as the house of Dionysus – to the ancient theater is called the Theater District and there are many treasures of the island’s archaeological site, such as the home of Cleopatra and Dioskouridis (2nd century BC). .).

House of Cleopatra and Dioscurides

Regarding the ancient theater of Delos, the stone building was built in the 3rd century BC. and could seat up to 6,500 spectators. In the ancient theater, games were organized in the context of the Delians, and the excavation of the monument began in the late 19th century by the French Archaeological School.

Although large quantities of marble were transported to neighboring islands to be used as building material, 4,000 architectural members weighing 30 tonnes were recorded inside and around the theater.

The Delos Archaeological Museum was built in 1904 and today has a total of nine halls. The original building consisted of five western halls, to which many more were added in 1931, as in 1972.

Visitors to the museum can see grave statues and columns from the 7th-1st century BC, pottery samples from the Early Cycladic era, vases, figurines, small everyday objects, jewelery and mosaics from the 2nd-1st century BC.