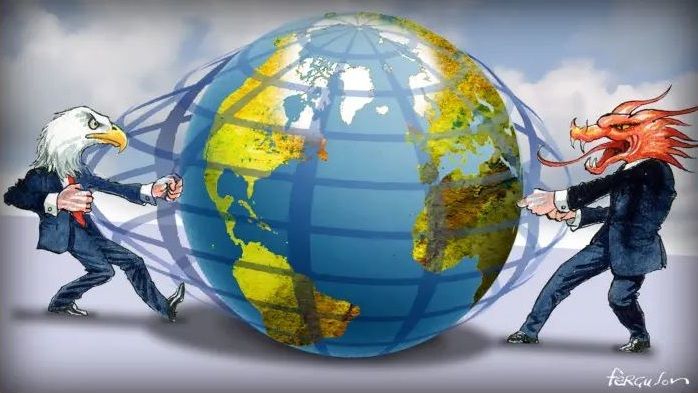 The US, China and the return of a two-bloc world

Mykonos TickerLeading news source for Mykonos and the Region
Mykonos Tciker English edition Politics News
Technology, not military power, will be the basis for this new global split
Gideon Rachman
During the cold war, there was an “east” bloc and a “west” bloc and nations were defined by whether they were closer to Washington or Moscow.
Now, nearly 30 years after the fall of the Berlin Wall, rising tensions between the US and China are re-creating a geopolitical dividing line.
And countries are increasingly expected to make clear whether they stand with Washington or Beijing. The latest example of this came last week, with the news that Italy is close to becoming the first G7 country to sign a memorandum of understanding endorsing China’s giant infrastructure project, known as the Belt and Road Initiative.
Within hours, a White House spokesman had criticised the BRI as “made by China, for China”, and suggested that it would bring no benefits to Italy.
The Chinese foreign minister fired back, reminding the Americans that Italy is an independent nation.
President Xi Jinping is planning to visit Italy later this month to seal the deal. The tug of war over Italy underlines that the US-Chinese rivalry is now global.
China’s economic and political pull reaches well beyond its Asian hinterland and stretches deep into Latin America and western Europe, areas that were once seen as naturally part of the American sphere of influence.
This Sino-American struggle is also increasingly overt. The Trump administration’s decision to launch a trade war on China ended the era when both sides could insist that trade and investment were neutral territory that could be kept separate from strategic rivalry.
At the same time, the sheer ambition of the BRI has stoked fears in Washington that China is entering a new phase in its rise to great power status.
If the BRI succeeds it will link the whole of the Eurasian landmass much more closely to China, potentially undermining the importance of transatlantic links.
In Washington, big Chinese investment projects are now routinely scanned for their strategic implications. The fact that Chinese firms are investing heavily in ports around the world is seen through the prism of an emerging naval rivalry with the US.
And the international expansion of Huawei, the Chinese telecoms company, has become part of a broader struggle over technological supremacy and espionage. American officials have spent recent months imploring their allies not to allow Huawei to run 5G networks, arguing that this would be an intolerable security risk.
Several key US allies, including Japan and Australia, have already taken the American line on Huawei. But others, such as Britain, are still thinking about it. If the British allow Huawei in, they will be taking a security risk that could damage their precious intelligence-sharing arrangements with the US. But if they block Huawei, British hopes for a post-Brexit trade surge in trade and investment from China will be at risk.
Getting squeezed between Washington and Beijing can be very uncomfortable. After Canada obeyed an American extradition request and arrested Meng Wanzhou, the chief financial officer of Huawei, the Chinese response was fierce.
Within days, Canadian citizens were arrested in China, and Canadian executives are now wary of travelling there. Similarly, when South Korea agreed to a US request to deploy an American anti-missile system called Thaad, Chinese tourists were directed away from South Korea and stores owned by Lotte, a South Korean retailer, were shut in mainland China after failing “safety inspections”.
The fact that China is increasingly willing to put direct pressure on US treaty allies is testament to the growing confidence of Beijing. That, in turn, reflects a shift in economic prowess. When countries along China’s Belt and Road consider whether to accept Beijing’s infrastructure packages, there is almost never a counter-offer from the US to consider. Nor is there yet an American firm that can offer an alternative to Huawei’s 5G technology.
In the battle for influence with China, the US’s trump card is often security rather than trade.
Countries including Japan, South Korea, Germany and Australia now all do more trade with China than the US. But they all still look to America for military protection. The US could undermine this security advantage if President Donald Trump goes through with his reported desire to charge allies for American protection.
But China is not currently in the business of offering security guarantees. As a result, an emerging two-bloc world is unlikely to be based around rival military alliances as it was in the cold war, when the Warsaw Pact faced off against Nato. Instead, it is technology that could become the basis of the new global split. China long ago banned Google and Facebook. Now the US is struggling to thwart Huawei.
With concern mounting over the control and transfer of data across borders, countries may increasingly come under pressure to choose either the US tech-universe or the Chinese version — and they may find that the two are increasingly walled-off from each other. But a division that started with technology would not stay there.
Data and communications are now fundamental to almost all forms of business and military activity. The two-bloc world of the cold war was replaced by an era of globalisation. Now globalisation itself may be threatened by the re-emergence of a two-bloc world.
Financial Times